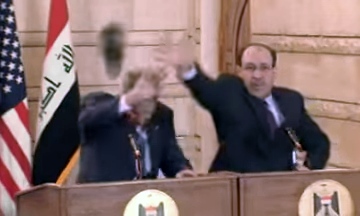 Al-Zaidi is an Iraqi journalist most famous for throwing his shoe at US President George Bush while shouting: “This is a farewell kiss from the Iraqi people, you dog.” For this, al-Zaidi was imprisoned, beaten and allegedly tortured.

While awarding this honour to al-Zaidi, the club announced it has removed Alistair Campbell from his role as honorary president.

Campbell was Tony Blair’s press officer between 1997 and 2003. According to the Guardian, he “sexed up” claims in a dossier on Iraqi arms so that they fit with claims from the US government which were known to be false.

In the tweet announcing their decision, the Labour Club posted pictures of Al-Zaidi throwing his shoe at George Bush and of Campbell shaking hands with Bush.

Franco was a campaigner for women, LGBT people and poor people in favelas in Brazil. She was killed, apparently by professional assasins, in March 2018.