The army is a powerful institution embedded in the British state. We have to treat it as such, writes Symon Hill. 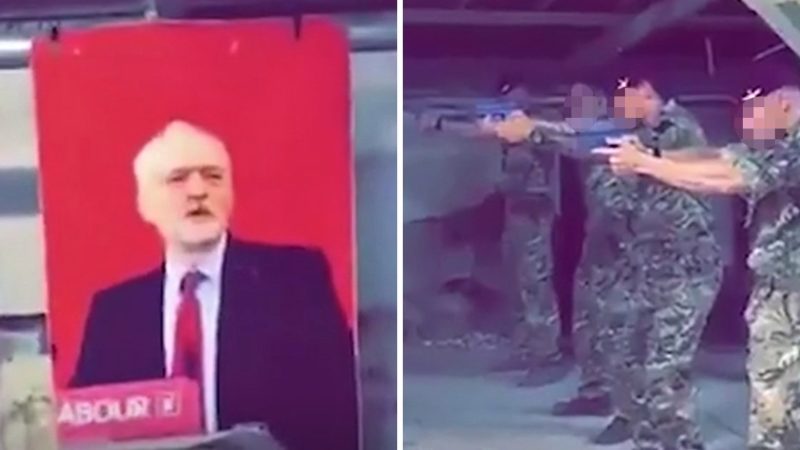 Bizarre news stories aren’t in short supply at the moment. But one of this week’s news stories hasn’t surprised me at all. This is the emergence of footage that appears to show British paratroopers firing at an image of Jeremy Corbyn.

What a contrast to the reaction in 2015, when an anonymous serving general told the Sunday Times that the army would use “whatever means possible” to prevent a Corbyn-led government scrapping Trident, leaving NATO or reducing the size of the armed forces.

On that occasion, both the government and the army declined to launch an investigation, although you might think that a serving general threatening a coup is  several times more serious than the target practice of four paratroopers. But then ministers may be keener on protecting generals than squaddies. The powerful look after their own.

The general’s comments were forgotten by Tory MPs who this week rushed to condemn the paratroopers as if their behaviour came as a surprise. These are the same Tory MPs who insist that Corbyn is a threat to “national security.” Conservative politicians and various newspapers have accused Corbyn of being both a pacifist and an IRA supporter. (He can’t be both – make up your mind!).

I have no brief to defend Corbyn. Speaking personally, I’m not even a Labour supporter. The Peace Pledge Union, who I work for, includes supporters of several parties and none. Nonetheless, the hysterical reaction against Corbyn by the militarist lobby is a reminder that anyone who is seen as critical of the armed forces receives streams of abuse. When militarists claim the army is “apolitical”, this is essentially a euphemistic way of saying that the army must not be criticised.

Tory minister Rory Stewart condemned the paratroopers on the grounds that soldiers “should not be political” because “they are there to defend the country and the Queen”.

But “Queen and country” is a political concept. Not only does it involve belief in monarchy but it generally includes a particular understanding of “country”, in practice involving loyalty to those who hold power in the nation-state of which you happen to be part (usually through an accident of birth or circumstance).

Supporting the army means embracing certain other political positions, such as a belief that violence resolves conflict and that unquestioning obedience is something to be admired, rather than an assault on human dignity.

The army is not only a political institution but a powerful one. The Army Foundation College, where 16- and 17-year-old recruits are trained, received 50 formal allegations of abuse and ill-treatment between 2014 and 2017. But the armed forces are the only institutions in the UK who can legally conduct their own criminal trials.

A school that faced such accusations would face being closed down. The army just sailed through the small amount of negative coverage.

A recent report by Professor Paul Dixon also points out that generals lobbied Tony Blair to deploy more troops to Iraq than he was originally inclined to do. Dixon lists several examples of military leaders influencing government policy over the last twenty years.

The problems in the army go way beyond a few soldiers shooting at an image of a left-of-centre politician. With Gavin Williamson threatening to deploy 3,500 troops on the streets to deal with a no-deal Brexit, now is a vital time to consider this: the armed forces are a threat to democracy.

4 Responses to “The Corbyn firing range footage should come as no surprise: the army is deeply political”