Disabled and unemployed members had voiced concerns over the 'I Heart Unions Week' tweet. 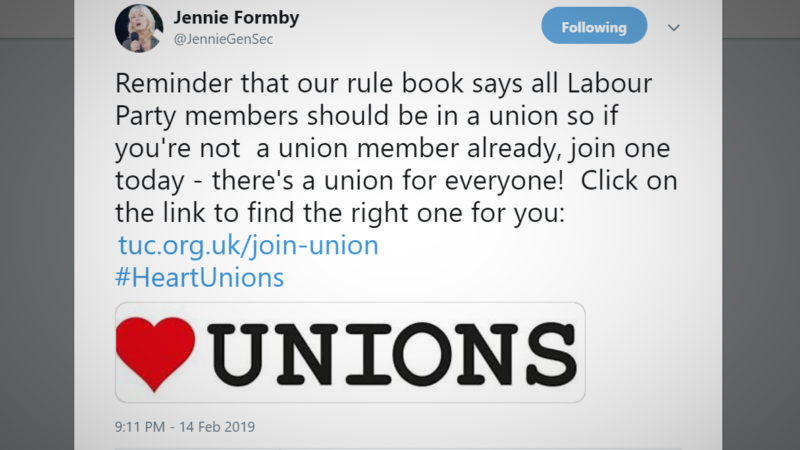 The Labour Party’s General Secretary Jennie Formby has apologised after accidentally implying that unwaged and long-term sick members of Labour must be in a trade union.

In a tweet celebrating ‘I Heart Unions’ week – which the Labour Party officially endorses – Formby said on Thursday: “Reminder that our rule book says all Labour Party members should be in a union.”

Reminder that our rule book says all Labour Party members should be in a union so if you’re not a union member already, join one today – there’s a union for everyone! Click on the link to find the right one for you: https://t.co/vg2ynWzRHI#HeartUnions pic.twitter.com/jMso0ONHFO

The ‘if applicable’ leaves a lot of wriggle room, but several disabled and unemployed Labour party members replied with anger to Formby’s tweet, over the implication that they must join a union or face being kicked out:

I’m unemployed due to being mentally ill and I don’t particularly want to join a union at this moment in time,I haven’t ever been a member of a union in my life so far. I cannot afford to pay out anymore money. If that’s what gets me kicked out of the Labour Party then so be it.

So, as a disabled, chronically sick person who hasn’t worked for 25 years, is on DLA and ESA, I now have to cancel my renewed Labour membership? Someone tell me what’s going on, please?

Formby then issued a clarification on Friday:

My apologies if this tweet promoting Heart Unions week has caused any confusion. The actual wording of the rule says ‘if applicable’ so does not apply to unwaged members https://t.co/bH2WYfL9r1