Arms fair organisers are stuck in a game of cat and mouse with peace activists. 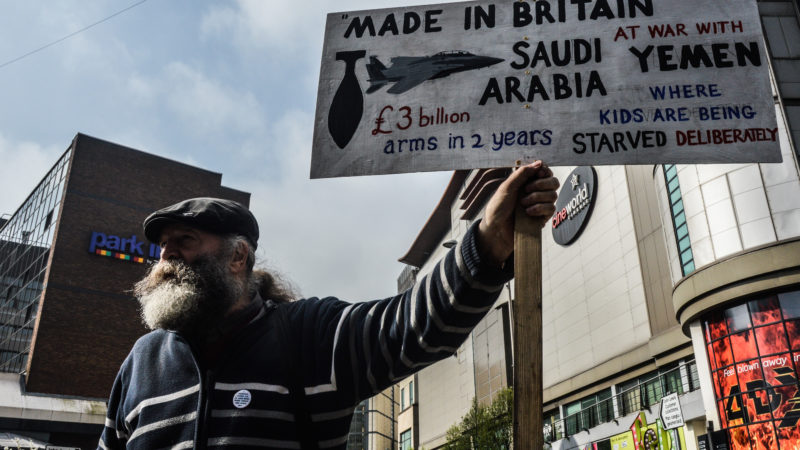 Campaigners are celebrating after a Tory-backed arms fair was forced to move to another venue – before it has even taken place.

The Defence Procurement, Research, Technology & Exportability (DPRTE) arms fair was due to take place at Birmingham’s NEC on 28 March 2019.

The arms fair’s original booking in Cardiff was called off following similar protests and objections from local people last year.

But it will now happen at the Farborough International Exhibition & Conference Centre following local opposition.

DPRTE brings together all parts of the arms industry to connect small companies with some of the world’s largest weaponry and defence firms.

It is one of the key events in the arms industry calendar and could not happen without support from the UK Ministry of Defence and the Department of International Trade, who are listed as event ‘partners’ but also attend as prospective buyers alongside the US Defence Department.

Exhibitors include BAE Systems, which produces many of the fighter jets being used by Saudi-led forces in the ongoing bombardment of Yemen – a site of gross human rights violations.

The decision to move the venue follows an active and vibrant local campaign by local activists, with the Birmingham Stop the Arms fair group having planned a day of creative actions against the fair.

A DPRTE events staffer confirmed the cancellation was to do with ‘health and safety’ and that the event will be held at Farnborough.

“The arms fair has been controversial since it was first held in 2013. It moved to Cardiff after protests but faced really big opposition there…and now the organisers have been forced to move it again.

Activists had planned a day of action in Birmingham – but apparently that was enough to cancel the event. Around 50 people had recently attended a workshop to organise demonstrations, with plans for ‘creative’ protest. “Event organisers were quite worried by the attention,” Hobbs said.

Farnborough air base is seen as a more secure venue that is far out from the main town. But Hobbs said: “We’re planning on keeping protests going.”

The local CAAT group there are ‘fiercely opposed to the military activities that take place’ in the area, which is home to arms company Qinetiq.

Moving the venue will have cost arms fair organisers and attendees a substantial amount of money. “Birmingham NEC is not a cheap venue to book. DPRTE organisers have now had to move it, rebook the venue, travel and so on,” Hobbs noted.

The US defence department reportedly has a large presence at DPRTE.

Campaigners have now received an email from the event organisers which claimed that the decision was made following consideration of “the impact of all events on all our guests.”

Organisers say that they decided it was “more appropriate for DPRTE to be hosted at a more self-contained venue.”

“The arms industry is not welcome here. The DPRTE was already chased out of Cardiff, and now Birmingham. The government might be willing to ignore the death and destruction caused by the arms industry, but local people are not.”

The full email from the event organisers is below:

Since agreeing to host the Defence Procurement, Research, Technology & Exportability 2019, some changes have had to be made to the setup of the event in order to allow for its smooth and safe running.The complexity of the NEC campus, with multiple exhibitions, conferences and entertainment events taking place on site simultaneously, means we must always consider the impact of all events on all our guests.

Reviewing the plans with the organiser has led us to believe it’s more appropriate for DPRTE to be hosted at a more self-contained venue – therefore it will now be hosted at Farnborough International Exhibition & Conference Centre.

Many thanks, Team NEC

Stuart Andrew MP, Minister for Defence Procurement and Jim Carter, Commercial Director of Supply Chain at the MOD are among government figures set to speak at DPRTE this year.

Left Foot Forward have been covering the DPRTE arms fair for some time.