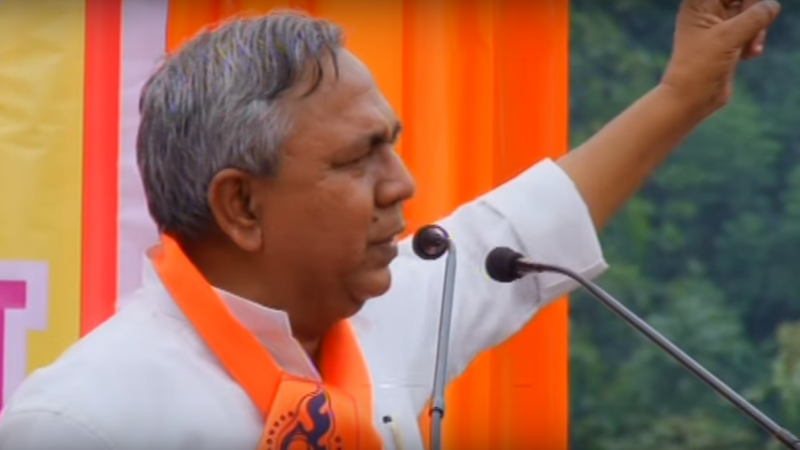 Tapan Ghosh is a man who has sparked outrage for years for one thing – anti-Muslim bigotry.

In the wake of the Rohingya crisis in Myanmar – one which has seen nearly a million Muslims flee persecution – the Hindu nationalist and founder of the far-right Hindu Samhati party, said: “Backwardness is the most powerful ‘weapon’ of Islam. Rohingyas are glaring example.”

This wasn’t a one off. He added: “Shame on Rohingya men. Shame on Islam. Seeing this reproduction rate, how can we blame the Myanmar Buddhists for driving them out?”

Last week, a Tory MP welcomed this man into our Parliament.

The Harrow East MP hosted a Parliamentary event, ‘Tolerating the Intolerant’, organised by the National Council of Hindu Temples (UK) to mark the Divali festival on October 18. Ghosh contribution was to question the extent of toleration.

But more than 5,000 have already signed HOPE not Hate’s petition condemning Bob Blackman’s decision to invite Islamophobes into the Commons.

And now TellMAMA, who record incidents of anti-Muslim hate crime, are to submit a complaint to House of Commons officials over the incident, according to Sky.

Ghosh is more than aware of the controversy. Since the event he has proudly tweeted articles saying: ‘Pro-Modi MP hosts anti-Islam Hindutva extremist in UK Parliament‘.

It is entirely unacceptable that Tapan Ghosh was invited to spread his false, harmful views by our Members of Parliament.

“No Parliamentarian should be hosting this politician, given his history of extreme anti-Muslim statements. Ignorance is no excuse, as his views are well-known and he later met with the founder of the English Defence League, Stephen Lennon [Tommy Robinson].

“We are also disappointed to see that the National Council of Hindu Temples invited Ghosh, given that last year they cancelled ‘Tommy Robinson’ from speaking at a national event, following representations by HOPE not hate.”

While in the UK, the anti-Muslim activist spent time with English Defence League founder Tommy Robinson:

This evening with @TRobinsonNewEra in London. Had a good discussion on demograpy and global resistance against Islamic violence & aggression pic.twitter.com/ObiTqWreEy

Other contributions from Ghosh include accusing British Muslims of raping one million white English children, calling the UN to curb the birth rate of Muslims, and defending the slaughter of the Rohingya Muslims in Myanmar.

And he suggested that the increase in India’s Muslim population was similar to the grooming of underage girls by Pakistanis in Britain.

Islamophobia should have no place in Parliament. It’s right that anti-hate groups are challenging Bob Blackman’s invitation. We’ll soon see what the Commons authorities have to say about it.

3 Responses to “A Tory MP invited an Islamophobic extremist to Parliament. Anti-racism groups are outraged”