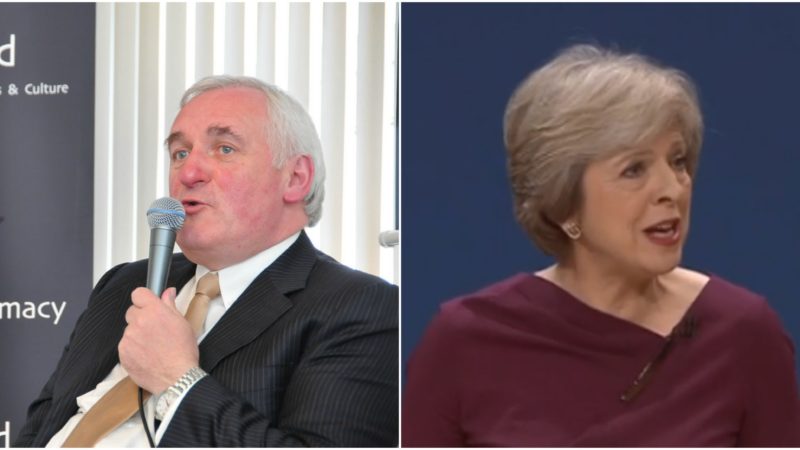 ‘I think that the land border we share with Ireland can be as free-flowing after a Brexit vote as it is today.’

That was the assertion of the then Northern Ireland Secretary and Brexit backer, Theresa Villiers, during the EU referendum campaign.

It sought to provide reassurances to those in Northern Ireland fearful of a return to a hard border in the event of Brexit.

Since the referendum, Theresa May and Irish Taoiseach, Enda Kenny, have been at pains to ensure that such a border does not reappear.

Such soothing words however have been dealt a significant blow following an intervention by one of the architects of the Good Friday Agreement.

In an interview with the Observer published over the weekend, the former Taoiseach, Bertie Ahern, has warned of a change of tone coming from Whitehall that poses significant difficulties for the Northern Ireland/Irish border.

He told the paper:

“[May] seems to be switching her language. She’s saying not that there’ll be no border, but that the border won’t be as difficult as to create problems. I worry far more about what’s going to happen with that. It will take away the calming effects [of an open border]. Any attempt to try to start putting down border posts, or to man [it] in a physical sense as used to be the case, would be very hard to maintain, and would create a lot of bad feeling.”

The most up to date statement of UK Government policy, within the Brexit White Paper commits Ministers to seeking a as seamless and frictionless a border as possible between Northern Ireland and Ireland.

Brexit Secretary, David Davis, has previously suggested that one model that could be followed is that of the border between Norway and Sweden which have in place CCT cameras with automatic number-plate recognition technology in them.

The European Parliament’s Chief Brexit negotiator, Guy Verhofstadt, however has poured cold water over such an idea, noting that there would need also to be customs checks and restrictions on the free movement of people. Ahern agreed, noting that he remained unconvinced that technology on its own could do the job.

The Observer also released details of a memo from the European’s parliament’s legal affairs committee scotching the idea advanced by Number 10 that the 1923 Common Travel Area deal between the UK and Ireland can form the basis of a deal on the border.

“The [Good Friday] agreement makes it abundantly clear that the fact that both parts of Ireland and the UK are within the EU is a basis for the agreement. Moreover, the fact that Brexit could result in the reintroduction of border controls and controls on the free movement of persons between Ireland and Northern Ireland means this is a question for the EU, and not only Ireland the UK.”

Sure enough, under a section on UK/Irish Government relations, the agreement commits them to developing ‘still further the unique relationship between their peoples and the close co-operation between their countries as friendly neighbours and as partners in the European Union.’

Raising his concerns about the prospect of a physical border might mean, Ahern continued:

“For the nationalist community in Northern Ireland, the Good Friday agreement was about removing barriers, integrating across the island, working democratically in the absence of violence and intimidation – and if you take that away, as the Brexit vote does, that has a destabilising effect.

“With so many other issues, there is a real concern … the only way [of] doing this will be a hard border. When people talk about hard borders, they’re talking about the borders of the past – but now any kind of border with checkpoints and security constitutes a hard border.”