The UKIP leader is a sexist bigot and apologist for the Kremlin. Sound familiar? 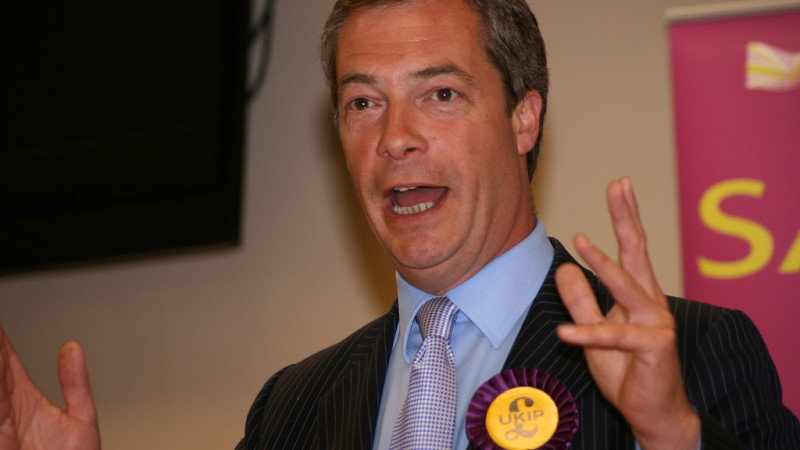 Nigel Farage would make a great British ambassador to the US, according to Donald Trump, who will make a terrible President of the United States.

Many people would like to see @Nigel_Farage represent Great Britain as their Ambassador to the United States. He would do a great job!

As Downing Street helpfully points out, the position is already filled, though they should have added it’s not Trump’s job to appoint foreign diplomats.

But putting aside the fact it won’t happen, here are some reasons why Farage is not remotely suitable for any such post:

1. He blames the EU for Russia’s invasion of Ukraine.

This might recommend him to Donald Trump, but Britain has called for Russia to be investigated for war crimes in Syria, backed EU sanctions on Putin’s dictatorship, heard in open court how he allegedly had a British spy murdered in London… the list goes on.

3. He said Britain was beset by a ‘Romanian crime wave’.

Not very diplomatic. He also doesn’t want Romanian neighbours, and when asked why replied: ‘you know why’. Er, because you’re a bigot?

4. He says defends sexism by employers.

He also said women are ‘worth less’ to employers, and denied there is ‘any discrimination against women at all’ at various City firms, where he worked before entering politics.

Farage’s party has always been terrible for women. Not a brilliant record for a diplomat, at least on a planet where more than half the population is female.

When accused of fiddling his EU expenses a few years back, Farage took the ‘they all do it, blame the system’ line to defend his behaviour.

His party has taken money from Tory press baron Richard Desmond and right-wing financier Arron Banks. What favours might a diplomat do for such delightful backers?

Oh, and his party is being investigated for misuse of funds during the EU referendum.

6. He said Africans were bringing HIV to Britain.

For these reasons and many others, whether in a formal or off-the-books capacity, Nigel Farage should be allowed nowhere near British diplomacy.

Just because the US president elect is a sexist bigot and apologist for the Kremlin, doesn’t mean Britain should toe the line.