There is no alternative to opposing these trade deals, says Unite's Tony Burke 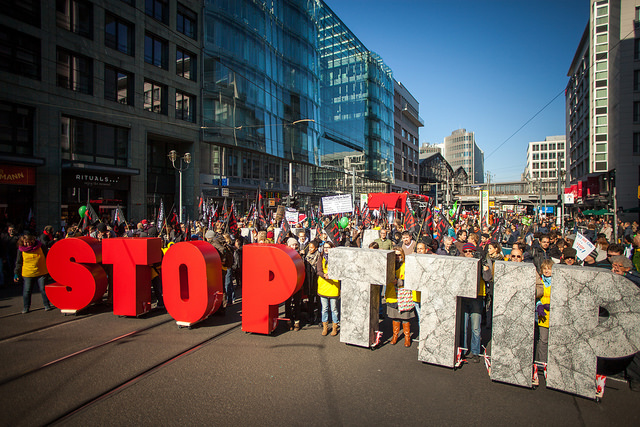 The European Union will not renegotiate CETA, the free trade deal between the EU and Canada, European Commission president Jean-Claude Juncker has said, in response to mounting criticism of the agreement that the EU and Canada hope to sign in October.

CETA would eliminate 98 per cent of tariffs, allowing the free flow of goods between Canada and EU member states as is seen as a blueprint for TTIP, a larger agreement being negotiated with the United States.

But criticism has been building up with unions and campaigning groups arguing that CETA is a back door deal for TTIP, which will undermine jobs and solely protect corporations through protection for investors.

Opposition has grown across Western Europe in trade unions especially in the UK, Germany and France, but worryingly the German trade union movement appears to be split along political lines.

‘Our partners are increasingly confronting us with the question whether the EU is still willing and able to conclude trade agreements with the rest of the world,’ Juncker told the European Parliament during his annual state of the union address.

‘There can be no renegotiations with Canada,’ he added.

So Junker has thrown down the gauntlet on CETA.

Suggestions by some European trade unions and MEPS that CETA can be ‘modified’ to include the demands made by some Canadian and European unions, including removal of ISDS clauses and inclusion of labour rights, are false illusions, especially to those who somehow think that CETA is a ‘friendlier’ agreement than TTIP.

What is now needed is total opposition to CETA.

See: The fight against TTIP is not over ‘till it’s over