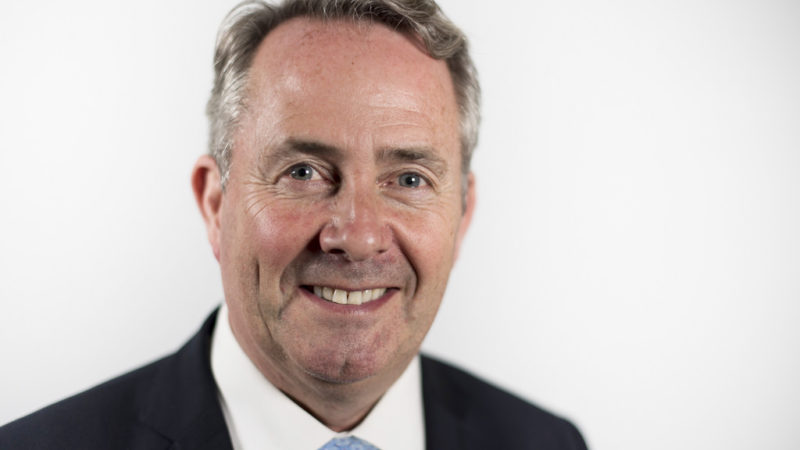 Disgraced former defence secretary Liam Fox delivered a speech on free trade at Manchester Town Hall this morning. Well, it was billed as a speech but actually had more in common with a sixth form economics essay.

Ranging from Adam Smith to North Korea to the Corn Laws, the now secretary for international trade celebrated ‘the glorious joys of free trade’, doing nothing to acknowledge the challenges and injustices it creates.

Here are our four key takeaways.

1. Liam Fox has no understanding of Brexit

It hardly comes as news, but Fox has once again demonstrating the the government is flailing round in the dark when it comes to exiting the EU, relying on truisms and platitudes rather than policies.

Fox believes that ‘the UK is in a prime position to become a world leader in free trade because of the brave and historic decision of the British people to leave the European Union.’

But he has yet to provide any guidance on how we get from here to there, and avoid the massive economic dangers that lie along the way.

As Pat McFadden of Open Europe puts it, ‘you have to feel for Mr Fox – a man with a job and a title but as yet neither a role nor a plan.’

2. Liam Fox’s Conservatism owes more to the 1840s than the 21st century

Brexit’s more fervent supporters included imperial nostalgists, who believed that by leaving the EU Britain could turn back the clock return to the glory days of the Empire.

The days when, as Fox put it, ‘a small island perched on the edge of Europe became the world’s largest and most powerful trading network.’

No mention of course, of the fact that through its zealous campaigns for free trade, Britain appropriated the resources of other nations, brutalised their people and repeatedly instigated war and famine.

All of that was considered tolerable because, to quote Fox again, Britain ‘pioneered canal networks and invented railways’, and exported ‘ideas of commerce, law and liberty.’

Unfettered free trade concentrates power and wealth in the hands of the most powerful, abandoning the most vulnerable. Plenty of modernising Conservatives and economists have acknowledged that. It’s concerning that Britain’s secretary for international trade has not.

3. Just as Michael Gove has had enough of experts, Liam Fox is finished with geography

Fox says we are at the the beginning of a ‘post-geography trading world’, which will undoubtedly complement his post-truth approach to politics.

The idea is that we should no longer be bound to trade with those who are physically close to use, such as our EU neighbours, but rather stretch our trading relationships around the world.

Fox disregards the fact that trading heavy goods and agricultural products around the world is much more costly, more energy intensive and environmentally destructive — transport still requires labour and fuel even in this post-geography era.

Moreover, he all but ignores that fact that unrestrained free trade has been disastrous for many communities in Britain, such a Welsh steel workers, beyond a vague promise to ‘take action against anti-market measures such as dumping’ — something successive Tory governments have resoundingly failed to do.

4. Liam Fox doesn’t have any power

A few weeks ago, Nick Clegg said that Fox ‘doesn’t have a job and doesn’t appear to have realised that yet,’ predicting that he will quit in a huff within 18 months.

Indeed, until Britain has formally left the EU, it cannot take significant steps towards new trade deals, which would leave Fox sitting on his hands for at least another two years.

What’s more, it’s clear that Theresa May has incredibly little trust in her Brexit triumvirate of Fox, Boris Johnson and David Davis. She has given them little input into decision making, and repeatedly slapped them down when they speak out publicly.

Today’s speech, with it’s sham intellectualism and complete absence of policy proposals, was quite clearly a sop to Fox’s pride.

Number 10 was happy to give the secretary a day out, but won’t let him say anything of substance.