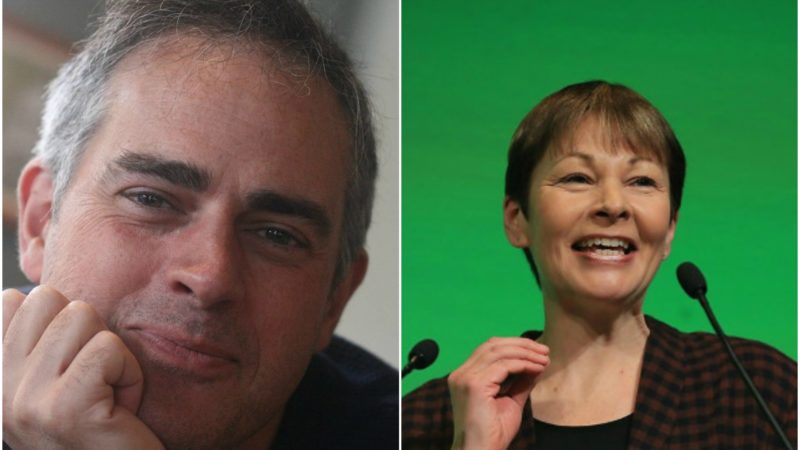 Caroline Lucas MP and Jonathan Bartley have secured the leadership of the Green Party of England and Wales with an overwhelming majority.

Topping the ballot of 44,000 members with 86 per cent of the vote, Lucas – the MP for Brighton Pavilion, and Bartley – the Green Party’s Work & Pensions Spokesperson – cemented their positions as new leaders of the party in the first round, under the Alternative Vote ballot.

The pair stood against five other candidates in what was a broader field than many initially expected, and take over from Natalie Bennett who had secured two terms since 2012 but decided to step down this year.

In their first speech as leaders, Bartley and Lucas proposed a plan to tackle the ‘age of insecurity’, including a Green Industrial Strategy.

“Imagine a new plan that will meet our obligations to future generations. A plan that will create jobs in every part of the country. Imagine local communities, empowered to take control of their own energy futures. Imagine Britain as a world leader in renewable technology. Our Green Guarantee means a new industrial revolution that will work for everyone.”

Bartley and Lucas’ co-leadership of the Green Party is a first for a Westminster party.

In their speech they reinforced the Green Party’s position following the European Referendum by calling for a second referendum on the terms of exit, and proper parliamentary scrutiny of the process.

Bartley and Lucas also gave a ‘cast iron pledge to put people in control’ by rejuvenating British democracy. At the core of such a proposal is a commitment to a fair voting system for the House of Commons and a pledge for constitutional reform. They also laid out their blueprint for a new political settlement built on progressive alliances to beat the Conservatives at the next election through a form of pact with proportional representation at its core.

‘Every vote needs to count,’ they said in today’s speech. So we are resolute in wanting to explore the potential for progressive alliances with other parties that will deliver fair votes.’

Lucas led the party for four years from 2008-2012, winning the party its first Parliamentary seat in 2010 and overseeing a rise in the party’s vote and membership – something built on by Bennett through the ‘Green surge’.

The scale of Lucas and Bartley’s vote will be considered a significant mandate to build on their calls for a ‘progressive alliance’ with other left of centre parties at the next election – something which will be discussed extensively at the Greens’ conference over the weekend.

The final turnout in the election – 36.1 per cent, or 15,853 voters out of the party’s 43,900 eligible members – is the highest ever in an internal Green Party ballot, despite being the first to be conducted almost entirely online.

Amelia Womack has been re-elected as the party’s deputy leader. Under the party’s leadership rules, if two people win the leadership post on a joint ticket, only one Deputy can be elected.

‘I am thrilled and honoured to be re-elected as Deputy Leader to continue my work for the party,’ Womack commented. ‘I look forward to working in such a formidable leadership team, and with such strong support from our membership I know that we can take the party forward.’

The results have been announced at the party’s current Autumn Conference in Birmingham, which up to 1,200 members are due to attend – around 40 per cent of whom are first-timers.

Left Foot Forward will be covering the Green Party of England and Wales’ conference in Birmingham over the weekend.