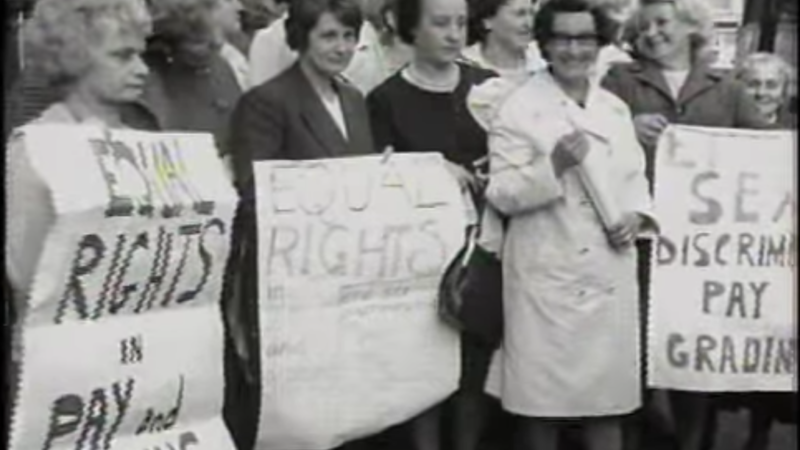 Women have long used EU law to get discriminatory rules overturned and to secure new rights at work. That could be at risk if we vote to leave the EU.

The TUC published a report today outlining 20 key gains for working women since the UK joined the EU. They include gains on maternity rights, equal treatment for part-timers and equal pay.

From experience, I know that some readers are already rushing to the comment section, to tell me that we already had an Equal Pay Act before we joined the EU.

And they, of course, would be right. But as ever with the EU, the goodies are in the details.

The 1970 Equal Pay Act – famously triggered by the strike action of the Ford sewing machinists at Dagenham – only gave women the right to claim equal pay with a man in the same job or the same grade. This didn’t mean equal pay for work of equal value.

It wasn’t until the European Commission took legal action against the government in 1982 for failing to comply with EU law, that a Conservative government was forced to expand the Equal Pay Act to include a right to equal pay for work of equal value.

Hundreds of thousands of women, working as cleaners, carers, dinner ladies and check-out operator, have since used this right to challenge employers who had undervalued their work. They have succeeded in getting equal pay with men doing work requiring a similar level of effort, skill and responsibility, like refuse collectors, gardeners and warehouse workers.

Even the Dagenham Ford sewing machinists gained a pay rise from the Equal Value Amendments. As a result of their 1968 strike they got equal pay with men who were on the same ‘lower skilled’ grade.

After the new rules took effect in 1984, they pressed for their jobs to be re-evaluated, and ended up with ‘higher skilled’ levels of pay.

Maternity rights are another good example of the importance of detail. In the Brexit debate, you’ll hear claims that ‘we had maternity leave before the EU required us to’ or ‘our maternity leave is far longer than what EU law requires’. Both of which are true.

But go beyond the basic talking points, and you’ll see that EU law has resulted in a much wider set of maternity rights.

The EU Pregnant Workers Directive was instrumental in ensuring the health and safety at work of pregnant women and new mothers. When it was implemented in 1993, for example, it led to a right to paid time off for ante-natal appointments, which was extended to many pregnant agency workers by another EU directive in 2011.

The Directive also resulted in women being protected from dismissal for pregnancy or maternity reasons from day one of employment – if the normal qualifying period applied today around a fifth of pregnant women would not be protected.

And, in the past, British judges ruled that dismissing a woman because of pregnancy was not sex discrimination because an employer would have dismissed a sick man in similar circumstances. The European Court of Justice rightly put an end to that.

But the group of workers that has probably gained most from EU law is part-time women workers. Again, Brexiteers often brush aside the risks to basic EU-guaranteed rights like paid holidays, saying that we had paid annual leave long before the Working Time Directive required it.

And again, it is true that most full-time, permanent employees did get paid holiday. But many part-time workers (who are mostly women) did not.

One in three part-timers had no paid holiday (compared to one in twenty-five full-timers). If that was still the case today, there would be 2.3 million part-timers without paid leave – 1.7 million of whom would be women.

Because part-time workers are mainly women, treating them worse than full-timers is often a form of indirect sex discrimination – a point the EU court helpfully made back in the 1980s. The former Equal Opportunities Commission successfully used this to get rules that disqualified some part-timers from unfair dismissal rights and statutory redundancy pay overturned in 1994.

Once again, a Conservative government was forced by EU law to improve workers’ rights against their will.

Numerous other gains are outlined in the report from parental leave to better protection from harassment to equal access to pensions for part-time workers.

There are also EU measures that make sure equality rights are effective in practice, like better compensation in equal pay and sex discrimination cases. Indeed, even now, Unison is basing its current legal challenge to the introduction of employment tribunal fees on this effectiveness principle.

If the UK votes for Brexit on 23 June, it is unlikely that we will lose the Equality Act or the right to take maternity leave. (That’s assuming no one listens to the pro-Brexit Steve Hilton.)

But our rights to equality could be narrowed once again and ‘pro-business’ exemptions introduced. Or they could be made less effective as compensation is slashed and more barriers are put in the way of access to justice.

Is voting to leave really worth the risk?

Sally Brett is senior policy officer at the TUC

14 Responses to “What has the EU ever done for women’s rights? Quite a lot actually.”