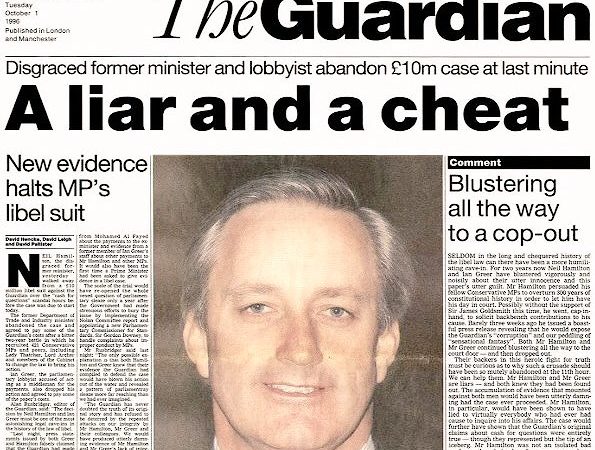 Neil Hamilton has been elected to lead the UKIP group in the Welsh Assembly, adding another dubious distinction to his bizarre political career.

Hamilton, who was born in Wales but lives in Wiltshire, was Conservative MP for Tatton from 1983 to 1997, when he lost his seat amid a scandal over his alleged acceptance of brown envelopes in return for parliamentary questions.

Several years earlier, he sued the BBC over a claim on Panorama that he had performed a Nazi salute while on a parliamentary visit to Berlin. After the BBC settled the case, Hamilton admitted that he had in fact given a small salute, with two fingers to his nose to resemble a moustache.

While many were distressed by his election to the Welsh Assembly last Friday, his selection as leader does have a silver lining — it increases the likelihood of a major UKIP split.

The rift between Hamilton and Nathan Gill, leader of UKIP Wales and a close ally of Nigel Farage, is long-running, but will now take on new intensity.

Already, Hamilton has fired Gill’s campaign team, allegedly for being ‘Farage loyalists’, a decision that Gill says ‘smacks of vindictiveness’.

Farage himself chipped in to describe Gill’s removal after a successful campaign as ‘an act of deep ingratitude’.

‘We in Wales will give appropriate weight to the opinion of the MEP for the Southeast of England,’ Hamilton responded.

UKIP has been teetering on the brink of civil war for quite some time, with repeated disputes between pro- and anti-Farage factions.

Farage reportedly doesn’t speak to his party’s only MP, Douglas Carswell, and the Huffington Post today reports that former deputy chairwoman Suzanne Evans — who was suspended in March for ‘disloyalty’ — will be given an appeal hearing.

However, while it may be a bad day for (about half) the Kippers, members of the other Welsh parties are delighted.

Stephen Kinnock, Labour MP for Aberavon, says UKIP will now ‘come under the microscope a lot more and people will see them for what they really are: a rag-tag bunch.’

Owen Smith MP had an even simpler message:

Thank you. Proof positive of a higher power. https://t.co/ZmMder2yBh