The Tories are exporting radical school reform around the world 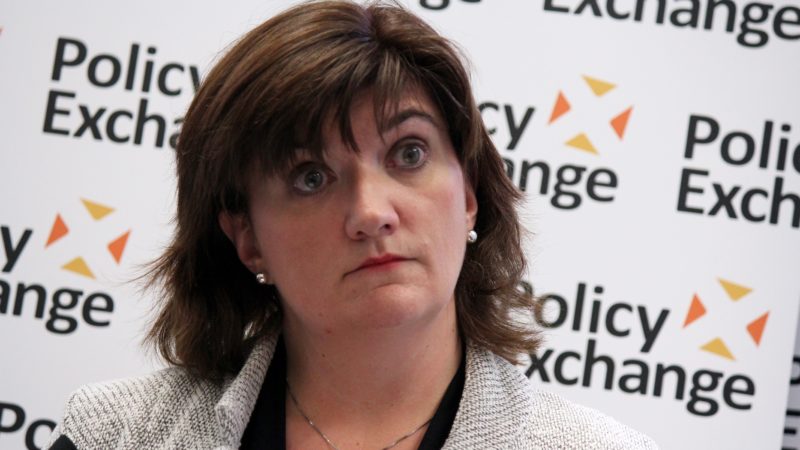 The Education Secretary, Nicky Morgan, must surely regret her attempt last week to explain to parents why she is taking the ‘state’ out of all English state schools and handing them over to private operators.

This is the message parents sent back — a representative sample of over a thousand responses to Nicky Morgan’s piece ‘Why academisation is best for our schools’ on the parent forum, MumsNet).

‘What a load of rubbish. I can’t be bothered to pick apart why. I have to put my daughter to bed.’

‘Thank goodness my children haven’t got too long left in education.’

‘This is so horrifying. And you’re incredibly patronising.’

‘Nobody believes you, Nicky.’

Yesterday it was the turn of Parliament to tell the government what they think of its plan to force all schools in England to become academies within the next five years. Labour secured yesterday’s Parliamentary debate, but the real blows came from the government’s own benches.

Conservative politicians – from local councillors, to MPs and the 1922 committee – are part of an unlikely coalition of voices to so far speak out against the plans, alongside teacher unions, commentators on both the left and the right, and the chief inspector of schools.

Most have decried the lack of anything like supporting evidence for the claim that changing governance structures drives up standards. Concerns also centre on the government’s bid to get rid of any public – and particularly parental – oversight of schools.

Questions are circulating about how the reforms will be funded; where will these new providers come from and what happens if and when operators fail?

Focusing on the detail of the plan for England is crucial, but opponents could learn much from stepping back for the bigger picture too. Which is that the government – with the strong encouragement of edu-businesses, technology firms and investors – is supporting similar radical changes to school systems around the world.

Take Liberia, which has an education system severely impacted by war and more recently the Ebola crisis. In common with England, though, it has a plan to privatise schools en masse.

Earlier this year, the Liberian government declared its intention to entirely outsource its public pre-primary and primary school system to the private sector, through a public-private partnership (PPP).

Liberian officials are being advised on the project by Ark.

That’s Ark, the darling of England’s academy chains, founded by financier Paul Marshall, who since 2013 has been lead non-exec director at the Department for Education.

As well as being a beneficiary of the (increasingly disastrous and discredited) PPP approach to public sector reform in the UK, Ark lobbies for privatisation around the world. It has developed what it calls a ‘Public Private Partnership accelerator’ as part of its international educational strategy.

Most of Liberia’s schools, however, are likely to be handed over to a for-profit firm, Bridge International Academies (BIA), in a contract worth an estimated $65m over five years. BIA, which also operates in Kenya, Nigeria and Uganda, normally charges fees for children to attend its schools, but it’s understood parents in Liberia will not be required to pay out of pocket.

The UK government is a major investor in BIA. The Department for International Development has given millions in public money to support its standardised ‘academy-in-a-box’ model, designed so that schools can be dropped into a country at a relatively low cost.

The efficiencies BIA promises come from its heavy reliance on technology. This is how it works: a single manager runs a BIA school with all back office processes automated via a smartphone app; teaching is delivered via a tablet with a scripted curriculum by teachers who receive just five weeks training; and everything – data from the delivery of lessons, testing and pupil attendance – is tracked by BIA headquarters.

Criticism of Liberia’s decision to outsource schooling has come from teachers, NGOs and the United Nations Special Rapporteur on the right to education, Kishore Singh:

“Abandoning the provision of public education to the commercial benefit of a private company constitutes a gross violation of the right to education,” he said. ‘It is ironic that Liberia does not have resources to meet its core obligations to provide a free primary education to every child, but it can find huge sums of money to subcontract a private company to do so on its behalf.’

Similar criticisms  – concerning government responsibilities and the misuse of public funds – could be leveled at the UK government.

Labour has condemned the immense cost of forcing all schools to convert to academies – more than £1.3bn by its calculation – on so little evidence of any benefit and when school budgets are already stressed. Likewise, teachers have attacked the plan for doing nothing to address the real issues facing English schools, most pressing of which are a ‘very serious’ teacher shortage and a lack of pupil places.

For education reformers with a global outlook, though, the solution to the problems faced by many schools systems – a shortage of qualified teachers amid dwindling budgets – are broadly the same the world over: allow private operators to cut costs and deliver teaching and learning through technology.

The UK government is geared up to lead this shift.

Its Industrial Strategy for Education, launched from Pearson’s London HQ, sets out an ambition for the nation to be a world leader in education technology.

‘It is about making the most of British ingenuity and innovation to develop new and affordable models for these countries to educate their growing numbers of young people’, it reads. ‘To do this we need to be at the forefront of the edtech revolution.’

‘New and affordable’ models of schooling, such as BIA’s, aren’t just for exporting, though. They are taking root at home too, and it is the privately-operated, academy school chains that are leading the way.

Ark, for example, sees technology as a means of ‘improving cost efficiency’ in its predominantly London-based schools. It plans to open the UK’s first ‘blended learning’ school, where digital learning replaces some teaching time. Ark, which counts serious edtech player, Google, as a ‘major corporate partner’, has also just launched Assembly, a service to ‘break open the market for start-up education technology companies’ by allowing developers access to pupil data.

The UK, like other countries, will see the growth of more ‘affordable models’ of tech-driven schooling as the privatisation of schools accelerates. More corporate school chains with automated processes; more governance by algorithm; more standardised teaching and testing via tablets; and fewer qualified teachers.

It may be more efficient, but is it what we want for our children and communities?

If it’s not what we want, or if we’re not sure, we should talk about it. In our schools, to our Parliamentarians, and on MumsNet.

If we don’t, if we sit back, it will be this emerging education market that decides how we school our children.

Tamasin Cave is a researcher with Spinwatch and co-author of A Quiet Word: Lobbying, Crony Capitalism and Broken Politics in Britain (Vintage, 2015)