Only Westerners are allowed to talk about Syria 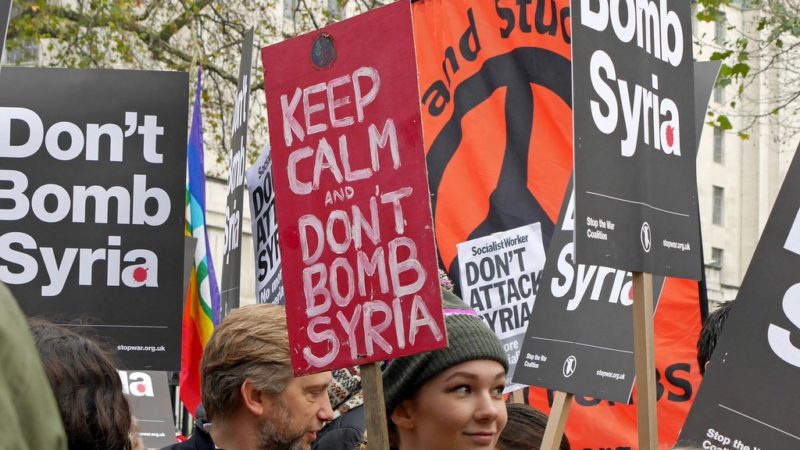 The Stop the War Coalition (StWC) have been accused of preventing victims of Syrian dictator Bashar al-Assad from speaking at an anti-war event.

During a panel event on Monday evening to discuss the case against British military intervention in Syria, StWC included no Syrians on the speaker’s panel and reportedly refused to allow Syrians to speak from the floor.

According to human rights activist Peter Tatchell, who attended the event, no Syrians were included on the panel and the Syrian activists who turned up to the event were threatened with arrest.

“Some Syrian victims of Assad’s brutalities turned up but were not allowed to speak. They eventually shouted out in frustration, turning the meeting into momentary chaos, as they were jeered by some of the audience and as StWC stewards tried to eject them – allegedly threatening that they’d be arrested. The police turned up soon afterwards.”

Tatchell went on: “Near the end of the meeting, I personally appealed to Diane Abbott to let the Syrians have their say, but she refused and closed the meeting.”

Tatchell’s comments mirrored those of Amr Salahi, an activist from the Syria Solidarity Movement who was also present at the meeting.

“Andrew Murray said absolutely nothing about the people being killed in Syria on a daily basis in Assad’s airstrikes,” Salahi said.

“Murray said that ISIS had to be defeated militarily, and the way to do that was not for the West to get involved but for the Iraqi army and the Syrian army (i.e. Assad’s army) to be helped to defeat ISIS.”

He added: “The [war] was not discussed in reference to the Syrian people in any way. The only focus was on British or American involvement. Not a single Syrian was on the panel. There were Syrians in the audience and at the first opportunity they raised their hands to speak.”

However after raising their disagreements with the StWC panel over the organisation’s views of conflict in Syria, Salahi said the Syrians were prevented from speaking again.

“The first [Syrian activist] to challenge the panel told the speakers they were only looking at ISIS, while Assad was killing dozens of people on a daily basis. [The Syrian] then compared Assad to Hitler, and I told the speakers they were like the Neville Chamberlains of today. [Panellist] Crispin Blunt MP, a supporter of the Iraq war, answered that people in Syria were now looking to Assad to protect them from Islamist extremists. He was unaware that [the Syrian activist in question] had lived in regime controlled Damascus for more than three years since the start of the revolution,” Salahi said.

He added: “After this intervention, no other Syrians were permitted to speak. [The panel] kept opposing the possibility of Western intervention as if that was the only factor. Clara Connolly, an immigration lawyer and activist with Syria Solidarity UK, later told the StWC they were silent about Assad’s crimes but they didn’t care. I told the speakers they just wanted Assad to keep killing people. Clara kept trying to make the point to the speakers that they had nothing to say about what was happening on the ground. All she got in return was silence. Then some of the organisers went up to her and warned her that if she didn’t be quiet, she would be forced to leave.”

Peter Tatchell told LFF a similar story: “When it came to questions from the floor, other members of the audience were asked to speak but not the Syrians. Near the end of the meeting, I personally appealed to Diane Abbott to let the Syrians have their say but she refused and closed the meeting.”

Tatchell added that he was “shocked, surprised and saddened by Diane Abbott’s unwillingness to invite Assad’s victims to express their opinions”. He added that not listening to victims of Assad’s war crimes was “arrogant, insensitive and appalling. It has a whiff of ‘we know best’ and Syrian opinions ‘don’t count’”.

This is not the first time Syrians have been prevented from speaking at a StWC event on Syria. In September, in reply to a letter from Syria Solidarity UK asking StWC to include a Syrian in a separate panel event on Syria, StWC’s Lindsey German replied that it was “not appropriate” to hear from Syrians if they did not clearly oppose military intervention.

“Stop the War, which prides itself on being an anti-imperialist organisation, has an imperialist mind-set par excellence,” Salahi said. “Syrians are not allowed to have an opinion about their own country. Only Westerners are allowed to talk about Syria.”