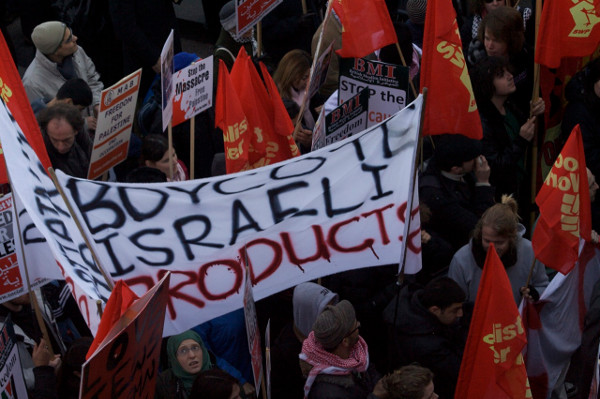 Last week over 300 British university academics decided to boycott Israel over ‘commitment to Palestinian rights’. The writers vowed to maintain the boycott ‘until Israel complies with international law, and respects human rights’, in a pro-BDS (Boycott, Divestment and Sanctions) demonstration against violence in the West Bank and Gaza.

Similarly the European Union is being pushed by NGOs to boycott all Israeli products made in ‘Judea and Samaria’ (West Bank) as ‘part of a larger economic war’.

The rise in Palestinian knife attacks and ensuing Israeli retaliation has left 11 Israelis and 69 Palestinians dead in the latest insurgency, mirroring the historically skewed number of casualties in the conflict. Those calling for Israeli boycott cite this numerical disparity, while calling out ‘apartheid state’ Israel’s ‘illegal occupation’ of Palestinian territory.

While it’s hard to argue against the discrepancy in force and violence, it should be equally hard to counter that violations of a much greater degree are being exercised by states around the world. And so one wonders why those jumping the gun on Israeli boycott remain silent on other states’ brutalities.

For instance, no one seems interested in boycotting China for its ‘illegal occupation’ of Tibet, or its blatant anti-Muslim policies in its largest province Xinjiang. There are not many protests against China’s ‘Islamophobia’ when it bars Muslims from fasting during Ramadan, or bans beards and ‘Islamic dressing’.

China’s ‘cultural genocide’ uses the actions of fringe Uighur radicals as justification for a broader state clampdown against all Muslims. The province itself has been occupied territory since 1949, with a separatist movement for self-recognition brimming over for decades.

For those wanting to demonstrate against colonial occupation, the recently signed Sino-Pak agreement over the $46 billion economic corridor should be a good rallying cause, considering it connects Xinjiang with Pakistan-occupied Balochistan, primarily benefiting Islamabad and Beijing. Just like China usurped Islamic Republic of East Turkestan (Xinjiang), Pakistan took over Balochistan immediately after the Indo-Pak partition.

Balochistan is witnessing its fourth insurgency since 1947 as it continues fighting for autonomy. Meanwhile, Pakistan Army continues to lift and dump Baloch citizens at will, in one of the goriest examples of human rights violations in the world, which has left over 23,000 missing persons.

Another mutual Sino-Pak occupation was that of the Kashmir region. While Beijing majorly withdrew, the occupied region has become a point scoring tool for India and Pakistan, with not much heed paid to locals’ rights. Even though the Pakistan-occupied Kashmir is still relatively peaceful, albeit without actual autonomy, India’s only Muslim-majority state has suffered savage human rights abuses since 1947.

The recent surge in Hindu radicalism, following right-wing BJP’s return to power in India, has seen Hindu mobs lynching Muslims over beef, as the state ups the ante on torture in Kashmir.

Meanwhile, Bangladesh’s ruling Awami Party is acquiescing to a killing spree targeting atheist and secular bloggers because it isn’t sure about the viewpoint of the ‘moderate Muslims’ – a significant vote bank. A little eastwards Myanmar is engaged in ethnic cleansing of indigenous Rohingya Muslims.

In addition to these South (east) Asians countries, another broader category of ‘Muslim world’ witnesses mass human rights violations. These 13 countries punish atheism by death – all Muslim majority states. While multiple factors – including Western imperialism – have marred progress in the Muslim world, most of these states have their own decades-long policies to blame for their volatility.

These include democracies and Western allies like Turkey, which occupies Cyprus and targets Kurds in the garb of the anti-ISIS fight, and Pakistan whose multi-pronged apartheid belittles Israel’s ostensible apartheid. In fact the uncanny semblance between the ugliest shades of Pakistan and Israel should be worthy of some attention from the anti-Israel protestors.

While the majority of the Muslim world doesn’t recognise the Israeli state anyway, all Muslims who seriously consider boycott as a means of protest, should actually self-reflect and start with Muslim countries. This year’s Hajj stampede death toll in Saudi Arabia should’ve instigated a mass boycott movement of the Saudi kingdom and the Muslim pilgrimage itself.

None of these wrongs make Israel’s injustices right. However, a complete lack of nuance and perspective in the Israeli-Palestinian conflict obviously aggravates the historical crisis.

While the Palestinian clerics and leaders’ incitement to violence is given a pass, and genocidal Islamists like Hamas are deemed freedom fighters, while global activists don’t even know – or care – about what’s going on in Balochistan, Kashmir, Xinjiang or Kurdistan, it’s easy to understand the common Israelis’ sense of victimhood.

Blatant depiction of Israel as evil and Palestinians as victims strengthens right-wings (Likud and Hamas) in both territories. Paranoid citizens worrying about their security don’t care much for ideologies, as Erdogan-led AKP’s return to a majority in this week’s Turkish elections testifies.

Anyone who doesn’t accept a two-state answer to the conflict can’t obviously be a part of the Palestinian solution. The same is true for all those who paint either of the two sides as the sole culprit.

An Israeli-Palestinian peaceful solution can only be reached via strengthening the inward-looking moderates who acknowledge and highlight their own side’s wrongs. An Israeli boycott that dubs the Jewish state as the ultimate evil would silence actual peacemakers on both sides.