Elections in Spain show the power of community and civic campaigners 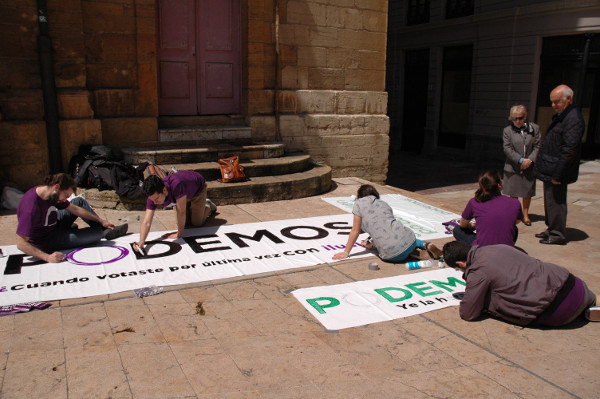 The great cities of Europe have seen some dramatic events this weekend, and next year’s London elections offer a huge opportunity to forge the kind of activist coalitions that have just taken over Madrid and Barcelona.

There are clear similarities between the recent fates of London and the other major European cities. On the one hand, these are the headquarters of the rich and the powerful. On the other, they are multicultural, young and energetic; neighbourhoods of millions who are seeing their hopes, their communities and their homes swept aside to make way for a future which ignores their existence. And they are fighting back.

I hope the members of the new all-Conservative cabinet are shifting nervously in their seats when they look at the results of the municipal elections in Madrid and Barcelona this weekend. In both these great cities, radical women are beating historical parties to Mayoralties on a wave that began with the collapse of the big banks, has travelled through the Indignados and been channeled into the extraordinary rise of Podemos.

If nothing else, the election as mayor of anti-eviction campaigner Ada Colau in Barcelona, and the expected confirmation of anti-austerity Manuela Carmena as mayor of Madrid, tells us an important story. The politics of the future does not have to look like the politics of the past, and the structures of a modern metropolis mean that when change comes, it doesn’t arrive slowly.

I’ve just announced that I want to be the Green Party’s candidate for London Mayor in 2016, and the big question for everyone involved in politics in London is how we can better reflect the energy that’s coming up from the grassroots in a powerful new wave of community campaigns. And for that, it’s clear we need to look to successes like Spain’s for inspiration.

The election of Ada Colau shows exactly how a coalition of community and civic campaigners, allied with left-wing parties can take over a city in a way the establishment here would like to make us think was impossible.

The new mayor of Barcelona wrote this before she was elected, describing the radical process in which her coalition, Barcelona En Comú, formed its platform:

“Over 5000 people took part in its development, resulting in a programme that focuses on guaranteeing basic rights, making the city more liveable, and democratizing public institutions. It’s a living document, the start of a conversation with citizens that will continue over the next four years should we win the election.”

London is crying out for the same approach. A huge comfort for me in the face of another Conservative government is that, despite the large numbers of crises we face thanks to inequality, low wages, filthy air and a broken housing system, people everywhere, and especially in London, are refusing to sit quietly and are building hopeful grassroots campaigns all around us.

Housing activists like Focus E15 and people on the Sweets Way and the Aylesbury estates have stood up and refused to let their communities be broken up without a fight. Social campaigners like trade unions and London Citizens are challenging councils and private companies to provide a living wage for workers.

Anti-racism activists are standing up against the Metropolitan Police’s stop and search programme. Community groups like Transition are forging new ways to do business and support local economies with initiatives like the Brixton Pound. And transport campaigners London Cycling Campaign, along with a wide range of independent cycling groups, are winning back our streets with ambitious new space for cycling and a refusal to accept any more deaths on our roads.

Along with many others, including Compass, I see radical hope in these campaigns and believe that next year’s London elections need to be about linking up these activists and communities, bringing their energy and ideas into City Hall, and letting the people of London sort out our city.

For me as a mayoral candidate, this means an open, inclusive and creative Green Party campaign that isn’t tribal or partisan and genuinely involves all of London in writing its platform.

The Green Party’s existing policies are great, but we need to resist the temptation to just grab a list of good ideas from our policy manual and rely on a good speech maker to put them forward. Instead we need to work with every local campaign group we can find to build something bigger and more open – something that we have clear evidence now can actually win.

Sian Berry is standing to be the Green candidate for mayor of London. Follow her on Twitter