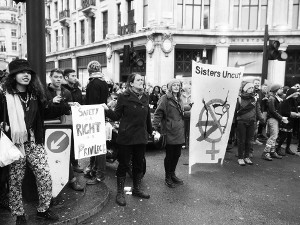 Sisters Uncut are a group of self-defining women who oppose the government’s cuts to domestic violence services. Their actions last Valentine’s Day have marked a point of no return in austerity’s war on women. Women will no longer stand by and watch the brutal removal of state funding that supports domestic violence survivors. They are fighting back.

On 14 February 2015, hundreds of ‘sisters’ gathered at the Eros statue in Piccadilly circus armed with a megaphone and bunches of flowers. Before they took to the streets and blocked all the traffic in Oxford Circus by occupying the pedestrian crossing, they held a vigil for the victims who lost their lives to domestic violence last year.

Attendees volunteered to read out the names from a long list of women and girls who have been murdered by men, and a flower was laid for each of them.

The list totalled 118 names, and as more names were read, more flowers amounted on the steps and more tears were shed from the mass of women that included domestic violence survivors and support workers alike. The youngest victim honoured was 22-month old Real-Jahzara McKoy, whose father murdered her and her mother Valerie Forde, 45, on the day he was asked to leave their family home.

Real-Jahzara’s case demonstrates exactly why the UK needs specialist domestic violence services. The support workers who staff them know that women are at most danger when they leave, they know that perpetrators are capable of extreme violence and they also know that it can take multiple attempts to leave.

These specialist services unwaveringly support women and their children on the long path to safety and freedom, rebuilding destroyed self-esteem along the way.

And yet these services are being cut. And as a result, even more women and children will lose their lives to the hands of violent men. Women’s Aid declares that the state of domestic violence in the UK is at ‘breaking point’.

An average of two women per week die at the hands of a violent partner, and in just one day in 2014, 112 women and 84 children were turned away from refuges because there was not enough space. It is unknown how many of this number ended up returning to violent partners and unsafe homes.

The coalition government did not hesitate before making these cuts. In the first two years of this parliament, funding for the domestic and sexual violence sector was cut by 31 per cent.

With cuts to Local Authority budgets, the scrapping of the Discretionary Social Fund, and then changes to Local Welfare Assistance, a vital safety net has been ripped away from thousands of women fleeing violence.

In their feministo, Sisters Uncut demand that this funding is not just restored, but increased to meet demand and extended to include women who currently have no recourse to public funds.

Another of their demands is survivors’ guaranteed access to legal aid.

Cuts to legal aid have led some domestic violence survivors to represent themselves in court; terrifying ordeals that mean survivors are left to cross-examine violent, manipulative ex-partners if they have any hope of justice.

The group are a diverse collective united in a single belief: that all women have a right to safety, shelter and support. Sisters Uncut’s action last Saturday has kick-started the beginning of an exciting new anti-austerity feminist movement, and until the government cede to their demands, we’re likely to see more of their activism.

Janey Stephenson is a writer and filmmaker who is passionate about ending violence against women. Follow her on Twitter