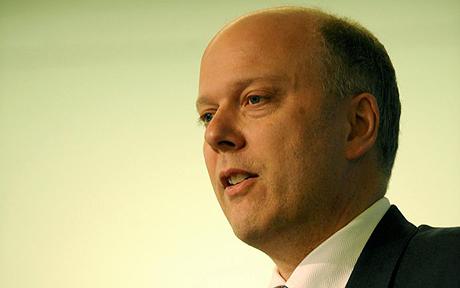 82 per cent of people in the legal sector say they would be more likely to vote Conservative in the general election if Justice secretary Chris Grayling was replaced.

The poll was conducted by new social networking site www.mootis.co.uk which focuses on the legal services sector. Many of the 350,000 people working in this sector are traditional Tory voters, a fact which is sure to send warning signals to David Cameron.

Grayling was defeated at least seven times in the courtroom last year, over policies aimed at reducing compensation for asbestos victims, cutting legal aid and banning books in prison.

Prior to this losing streak, Grayling’s career has been marked by controversies, including a scandal over expenses claims and a botched set of statistics on violent crime. In 2010 he was named ‘Bigot of the Year’ by gay rights charity Stonewall after he was recorded saying that B&B owners should have the right to bar gay couples.

Grayling is the first Lord Chancellor in 440 years who is not a trained lawyer. Mootis Chairman Bill Braithwaite QC said that it was clear that the vast majority of legal sector workers ‘are fed up of Grayling and are prepared to turn their back on the Conservatives if he remains as Justice secretary’.

“It is time for failing Grayling to go. He is the most inept Justice secretary in living memory. The vast majority of lawyers would accept that cuts needed to be made to the legal aid bill but the ham-fisted way in which he has gone about his business has made a mockery of our legal system.”

“Our courts have received such drastic funding cuts you can no longer attend in person anywhere in the country to actually speak to anyone.  They are also saying they don’t have enough people to answer the phones – this is what access to justice looks like in 2015.

“To compound matters Grayling now sees fit to make even further changes. Having made so many cuts the court system doesn’t work anymore he now wants to pass on the consequences of the cuts to the general public by charging a fortune in administration and issue fees. He is simply not up to the job and it is time for him to go.”

Meanwhile, former Tory MP Jerry Hayes has also laid into the Justice secretary over his attempts to limit access to judicial review. In an astonishing attack, Hayes described Grayling as ‘a shit which will have to be flushed’ after the election.

“No Lord Chancellor in living memory has been found by the courts to have acted illegally as much as Chris Grayling.

“His actions in dismantling judicial review are motivated purely by spite and embarrassment, and not what’s in the best interests of the country. He should focus on getting his own house in order before he wreaks havoc on the rights of the British people to hold to account their politicians.

“Former Tory MP, Jerry Hayes understands how important it is that the rule of law applies to ministers just as everyone else must abide by the laws of the land. Chris Grayling would be wise to listen to him.”