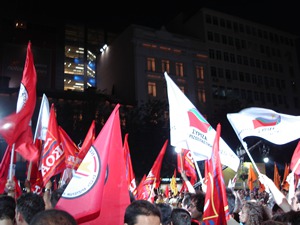 “I’m am ecstatic! I couldn’t be happier!” said Natalie, 24, beaming over wine and celebrating with her boyfriend on Klathmenos square on Sunday night. But her happiness masks the misery she has suffered in the last years like many Greeks. “My parents business went bankrupt but the bank forced them to keep paying their loans even though they were unemployed. My mother had a brain aneurysm from the stress and died last year. I had to quit my studies to support my family.”

The shear level of desperation among the Greek people has given Syriza its support. “Most people in Greece aren’t left wing, but they had nowhere else to look. Syriza is the only party offering a way out of the crisis,” said Alkinoos 18, a young student from Athens. He continued: “they are the only ones promising to help us, when they are in government we will tell them our problems and they will help.”

People believe Syriza can help because they have roots in the solidarity structures set up to assist those in need. Where cuts to public services and rising prices have hit everyday people, volunteers and activists have filled the hole the state left behind.

Across the country local communities have set up ‘social centres’. In Galatsi the social centre coordinates ‘markets without intermediaries’ that help provide cheap food to 30 per cent of the local population. They also provide pro-bono legal advice, language classes, food banks, cinema screenings and coordinate healthcare with the local social pharmacy.

These solidarity structures evolved out of an acute need to give an answer to the humanitarian crisis. “The people involved were not all from the left or Syriza, but simple people that recognized the need to stand together and help each other,” according to Stathis, one of the fatigued volunteers at the Perno Ampariza social centre in Galatsi. “These structures are political because they carry values of giving without receiving and solidarity. These values helped us to stand on our feet, literally and ideologically.” Syriza candidates and politicians have emerged from these movements.

Of course, it’s not just social centres, but other social movements, parties and unions that have linked up in the formation of the Syriza coalition. Building a broad spectrum party on the left has not been easy, but burying the hatchet of old left wing divisions has been key. “We spend less time asking what we are, and more asking what can we do?” said Giannis, a programmer and Syriza supporter.

The party had an enormous challenge to unite traditionally antagonistic forces: from communist parties, to ecological groups to syndicates. Its 40-year-old charismatic leader Alexis Tsipras – who never wears a tie and oozes charm – managed to bring together these groups. Giannis continues: “when Alexis decided to actively pursue power rather than just sit in the moral comfort of opposition, that is when the party rallied together behind his leadership.”

The collapse of social democrat parties has opened up space on the left for Syriza. The traditionally strong Pasok party supported the memorandum and austerity measures. As a result it has shed almost all its support as the situation declined in Greece. Pasok which had enormous support following the end of the Colonels’ military junta, went from coming first with 43.9 per cent of the vote in 2009 to only 4.7 per cent on Sunday. The support for austerity by social democratic parties has given Syria a moral monopoly over left-wing and centrist voters and many Pasok politicians have jumped ship to Syriza.

Left-wing parties everywhere are closely scrutinizing the Syriza model. Thiago, a 25-year-old representative of PSOL, the Brazilian Socialist and Freedom party, from Sao Paolo who flew to Athens to learn from Syriza, said: “They decided not to only be a party of words. But a party of action, they were involved with supporting the social centres to help provide for people’s basic needs, that’s what we can learn from Syriza.”

Of course there are many factors unique to Greek politics and its economic situation, but Syriza’s success holds lessons for the left everywhere. As austerity politics continue coalition building, social activism and pragmatism can and do help win elections. The tricky party is what Syriza is able to achieve now they have power.

8 Responses to “Comment: How Syriza became the most radical force in European politics”