A road-building policy that encourages more and more cars onto the roads is not in our interests. 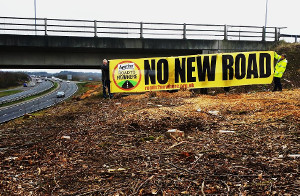 The government has just announced the details of a massive new road building programme.

It will cost around £30bn in all, with £15bn set aside for 2016-2020 through the first Road Investment Strategy for the strategic road network.

This must rank as one of the most counterproductive policy decisions for a generation.

Badly flawed feasibility studies have been used to justify damaging road building schemes right across the country including the A27 Arundel bypass in the South Downs, a number of road building plans in the Peak District National Park and the A417 in the Cotswolds.

The government claims the investment will be transformational, creating jobs and reducing journey times. But this is wishful thinking, ignoring the inconvenient truth that new roads create new traffic while dogmatically clinging to the assertion that road building is good for the economy.

We have known for more than 60 years that predict-and-provide road building is little more than short-term tail-chasing.

Schemes like the Stonehenge tunnel, the A27, dualling of the A1 in the North East and countless others are expensive and counterproductive, increasing our reliance on the car and taking money that could be used for, better, more sustainable transport options.

We have been here before – literally, in many cases. It was 25 years ago that Margaret Thatcher’s Government published the Roads for Prosperity White Paper.

This led to scores of protests against schemes like the ones over the Newbury bypass and at Twyford Down. Then, amid controversy and mass protests much of the government’s original programme of road building was dropped.

Now, it is not just the idea of large-scale road building that is back, it’s also the zombie-like return of many of the same projects which were rightly dumped in the 1990s.

Eventually, Roads for Prosperity did much to create the environment for more constructive transport and planning policies under the subsequent Labour Government.

The Road Investment Strategy heads us firmly back in the direction of town developments which are only accessible by car.

As for the economy, spending on roads is being prioritised over other areas such as education and health. Within transport, much more is being spent on tarmac while money for cycling and walking continues to fall significantly short of the transformational investment needed, and support for buses is actually falling.

A transport policy focused on helping people get out of their cars is better for business too. Getting non-essential journeys off the roads and onto decent quality alternatives is in business’ interest.

A road-building policy that encourages more and more cars onto the roads alongside essential traffic is not in business interests.

Worse, the government has given notice that its fixation with new tarmac will continue seemingly indefinitely with major new studies announced to look at dualling the A66 and A69, building an ‘expressway’ between Oxford and Cambridge, constructing a section of a new London orbital outside the M25 and even a £6bn road tunnel under the Peak District.

The government seems intent on taking transport policy back to the 1980s. It is an expensive, damaging and counterproductive approach which is already generating significant opposition and protest.

Government needs a transport policy to fit with modern needs, with a focus on better maintaining the existing roads network while supporting affordable and accessible transport options such as cycling, walking and public transport.