The House of Lords represents everything about the political class the British public despises. 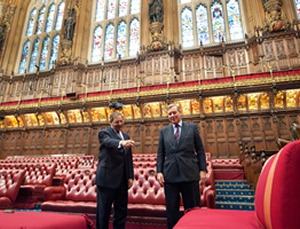 Ed Miliband seems to have had another spin on his policies wheel, and this time it’s landed on the House of Lords.

The proposals recently announced by Labour suggest a US-style Senate to replace the House of Lords, where each nation and region has a senator representative, instead of the current system in which Lords either inherit their titles or are appointed by the Queen, on advice from either the prime minister or the House of Lords Appointment Commision.

Back in March they called for a number of reforms, including limiting the number of peers to 450 and abolishing hereditary peerages, something they do have a history of at least partial success in. In their 1997 election manifesto Labour pledged to cure the Lords of its hereditary condition, and did indeed manage to reduce the number of hereditary peers down to 92 (not quite all the way).

The sceptics of these proposals suggest Ed is merely ‘paying lip service’ to reform, or even countering the Greens gaining ground on his left flank; but the Independent cites what Miliband claims to be the rationale behind the move: “When people say that they are turned off from politics and that it doesn’t represent them, we have to do something about it”.

Red Ed, apparently, is seeking to heal the rift between politics and the people; and for once it must be said, he seems to be on to something.

From Simon de Montfort’s first ‘parliament’ to the Great Reform Act of 1832 to the victory of the Suffragette movement, there have been key moments in British political history that have brought democracy that bit closer to the nation. With disengagement from mainstream politics soaring, it is clear the public’s hunger for change has outgrown the system’s flexibility for it and we need a new set of radical reforms to address this. While not enough on its own, the Lord’s is a pretty good place to start.

The House of Lords represents everything about the political class that the British public despise, with the titles, pomp, and all too often the actual people being starkly reminiscent of an outdated elitism, still wielding power in a 21st century democracy.

Their power has been diminished by various Bills over the years (most notably the 1911 and 1945 Parliament Acts) but the institution has, much like the monarchy, managed to limp on into the new century, still able to influence policy far more than the average citizen.

Unfortunately this elitism doesn’t just remain confined to the Lord’s – the Commons suffers from it too. There are an alarming number of millionaires in government, and representation of women and ethnic minorities in Parliament is appallingly low, with many areas of political power still working with an ‘old boys club’ mentality.

Once you’ve tackled those, issues such as a monarchy still imbued with constitutional power, a proliferation of oligarchic markets, and raging inequality still need to be tackled before people stop getting ‘turned off from politics’.

As a recent report put it, Britain is ‘on the brink of a lasting divide’, and tinkering around the edges of the system will no longer cut it. It is only by positioning these reforms as a catalyst for a wider, more radical review of our democracy that Ed will really be able to combat wide-spread disillusionment with Westminster.

Over the past few years, Labour have actually managed to come up with some (not many) decent policies, but when they do they lack the ability to defend them or apply them to a broader vision. If Ed sticks to his guns on the Lord’s reform and makes the case that it will be the start of a process that overhauls inequality and protected privilege, making politics more accessible and acceptable to the public, he could well be on to a winner.

Bradley Allsop is a blogger, chair of Northampton Young Greens and a student conducting his dissertation on political engagement

7 Responses to “Yes, reform the Lords. But don’t stop there”