As we celebrate our victories in the UK we must not forget those LGBT+ campaigners around the world whose situations are still desperate. 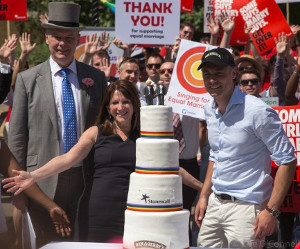 On Saturday the 29 March, I went to two fantastic weddings.

On that historic day when all love finally become equal before the law, same-sex couples were able to get married – and hundreds did!

At the second wedding I went to, which had a musical theme, a very poignant video was played before the ceremony. It showed a timeline of the steps towards securing rights for the LGBT+ community in the UK.

It included the marches in the 50’s, 60’s and 70s, the decriminalization of homosexuality and the lowering of the age of consent, and then moved on to adoption rights, civil partnerships and equal marriage.

The video also included some of the setbacks which occurred along the way. The awful Section 28 legislation was introduced by the Conservative government in 1988 and shockingly prohibited “the intentional promotion of homosexuality” by any local authority, as well as “the teaching in any maintained school of the acceptability of homosexuality as a pretended family relationship.”

Among other examples, this was a reminder that the journey for LGBT+ rights has not been an easy one – not without setbacks, not without opposition, and not without discrimination and oppression.

But sitting in the theatre in Alexandra Palace (where the wedding was held) surrounded by LGBT+ activists, the very happy couple and their families and friends, it was easy to see how far we have come in the UK.

Marriage is now well and truly equal – open to all couples regardless of their gender.

And that day, 29 March, was a landmark day for me too. It was a long journey, starting when I marched into the Home Office and said to my civil servants ‘’I am going to deliver same sex marriage – and I know it’s not in the Coalition agreement – but it needs doing.’

And the rest is history – literally.

One day, when I am no longer a minister, I will be able to tell the whole story of how the law came to be. But for now I can publically thank the activists, the LGBT+ community, the cross-party group of MPs, the Home Secretary, the Prime Minister, the Deputy Prime Minister and others for the support they gave.

And the effect of the change in law goes beyond the ability of same sex couples to marry. The legal change has also, I hope, gone some way into changing attitudes towards homosexuality. The more progress we make on LGBT+ rights, the more equal and tolerant our society will become, as no-one is treated like a second class citizen by the law.

I hope that, as a result of equal marriage law, the young LGBT+ community do not feel that they have to keep their sexuality a secret, or try to hide it – as people in previous generations often felt they had to.

It’s heartwarming now, whenever I speak at an event, when someone (usually a young man) approaches me at the end and says ‘thank you for what you did.’ It’s emotional – I cry, he cries – and we both know that our country is a better place than it was, now that marriage is equal.

And it was of course fantastic on a personal level to recently receive awards from both Pink News and Stonewall, in recognition of the work on equal marriage.

Ben and Jerrys also said thank you by sending me an ice-cream tub with my name and picture on it – one of the most random but wonderful gifts I have received for my work in politics!

But the work certainly doesn’t stop here. While we’ve made huge progress in this country, it was a culmination of a long journey, and there is still a way to go to fully stamp out discrimination.

As we celebrate our victories in the UK we mustn’t forget those LGBT+ campaigners around the world whose situations are still desperate.

From day one of my role as a minister in the Department of International Development (DFID), strengthening the department’s LGBT+ rights strategy was one of my top priorities.

DFID’s strategy has rightly been led by local LGBT+ campaigners in each country, and they asked that we take a subtle approach.

So, respecting their wishes, that’s what I did – I raised my concerns in private with African ministers and prime ministers, and met privately with local LGBT+ groups in country.

The new strategy is about to be signed off to extend this work further. I hope that the UK’s equal marriage law, and our ongoing commitment to LGBT+ rights, will also set a good example for other countries, who are at a much earlier stage in their journeys towards equality.

Lynne Featherstone is a Liberal Democrat MP, and was named Stonewall Politician of the Year. Follow her on Twitter

One Response to “Remembering the journey to equal marriage”