Neoliberals claim that shareholders are the owners of companies. This is nonsense, argues Austin Mitchell MP and Prem Sikka, Professor of Accounting, University of Essex 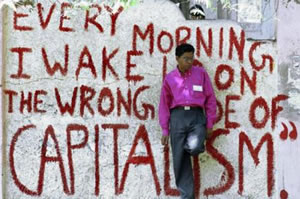 Neoliberals claim that shareholders are the owners of companies. This is nonsense, argues Austin Mitchell MP and Prem Sikka, Professor of Accounting, University of Essex

In its 2013 report, the Parliamentary Commission on Banking Standards concluded that “shareholders failed to control risk-taking in banks, and indeed were criticising some for excessive conservatism”. The Commission rightly recommended that company law should be changed to remove shareholder primacy in respect of banks, and require directors to ensure the financial safety and soundness of the company ahead of the interests of its shareholders.

No political party has had the good sense to follow up the above recommendations from a Committee, which included a former Conservative Chancellor Lord Lawson. Instead, economic elites continue to preach the futile myths about empowering shareholders to check corporate abuses.

Neoliberals equate “ownership” of shares with ownership of companies. Yet they provide neither theory nor evidence to support this claim. We can all enjoy a legal right to own a pen, a pencil, a car or a house, something which gives us rights, powers, liberties, duties and liabilities. We can use and destroy a pen. If a car that we own injures someone then we can be held liable. If we hold late-night parties at our houses which disturb others, police can be called to remind us of our obligations to neighbours. But ownership of shares in large companies is not like that.

(1) The right to possess: to have exclusive physical control of athing.

(2) The right of personal use and enjoyment of the thing.

(3) The right to manage: the right to decide how and by whom the thing owned shall be used,

(4) The right to income: receive benefit from foregoing personal use of the thing and allowing others to use it for reward.

(5) The incident of residuarity: It is a characteristic of ownership that an owner has a residuary right in the thing owned.

The idea of ownership confers powers, liberties and immunities. These include:

(1) The right to the capital: the right to capital consists of the power to transfer ownership to others through exchange, selling, gift and mortgage, etc.

(2) The power to transfer ownership to successors.

(3) The liberty to consume, waste or destroy the thing in question.

(4) The right to security: the owner should be able to look forward to retaining ownership indefinitely, if s/he so chooses and remains solvent.

But ownership isn’t just about rights and powers; it also confers duty and liability towards others. This includes:

(1) the prohibition of harmful use: the owner must not use the thing to harm others, and s/he must also prevent others from using the think to harm citizens. Violation of this duty would lead to penalties.

(2) The thing owned can be taken away to satisfy a debt either either by execution of a judgment debt or on insolvency.

What do Shareholders Own?

How does the above apply to ownership of shares in a large public company? Shareholders of a company, such as Royal Mail, cannot use any of the assets held by the corporation for their personal use. Under corporate law, companies are legal persons and in that capacity they own the assets and use them in accordance with the directions given by the directors. If any shareholder were to attempt to posses the assets and use them for personal enjoyment, they’ll be accused of theft and fraud.

Shareholders invest in the hope of getting a return on their investment, but do not have the right to demand income from the assets owned and used by the company. Shareholders can receive dividends but only after directors agree to declare them.

Shareholders can continue to enjoy the benefits of shareholding, as long as the company remains in existence, but cannot recover the capital represented by share certificates from the company. They can sell their shares to another party and can transfer or bequeath shares to successors, subject to the taxation laws of the country. The share certificates have some value, as long as the company is solvent. But that`s it: a speculative commodity not a control.

Directors of a company can sell the assets held by the company, but shareholders do not have rights to receive the proceeds. Shareholders do have a residual interest in the event of bankruptcy, assuming that the assets have been sold to satisfy the prior claims of secured and unsecured creditors. However, they might still not suffer the ultimate loss of their investment as the state has bailed-out banks and other corporations.

Neoliberals claim that shareholders are the owners of companies. Nonsense. Shareholders own a piece of paper that entitles them to receive income from a company. They do not own its assets, cannot personally access them or use them. They have powers to appoint directors but cannot direct them to use any particular business strategy. They cannot force directors to pay a dividend, or demand a higher one. They cannot demand to see a company’s books, or personally audit them. They can sit back and receive dividends, but are not responsible for the harmful use of the resources generating those dividends.

Courts have long distinguished the special characteristics of corporations and do not support the neoliberal propaganda. For example, in the 1935 case of Shaw & Sons (Salford) Ltd v Shaw, the judges said that “A company is an entity distinct alike from its shareholders and its directors. Some of its powers may, according to its Articles be exercised by directors; certain other powers may be reserved for the shareholders in General Meeting. If powers of management are vested in the directors, they and they alone can exercise those powers”. The 1908 case of Gramophone & Typewriter Ltd v Stanley said that “even a resolution of a numerical majority at a general meeting of the company cannot impose its will upon the directors when the articles have confided to them the control of the company affairs. The directors are not servants to obey directions given by the shareholders as individual; they are not agents appointed by and bound to serve the shareholders as their principals”. Successive Companies Acts have codified directors’ duties, but they are not subject to control by any individual shareholder.

So the neoliberal notion that shareholders are the “owners” of companies has little economic and legal substance. At best, share ownership results in a very weak notion of ownership, but not sufficient to direct, control the company, its directors, assets or liabilities. Who owns the company? The answer is that the company owns itself and is the sole andbeneficial owner of all the property vested in it.

Policymakers must move away from narrow concerns about shareholder welfare to building a stakeholder economy. Corporations are created by the state and it has the legal and moral duty to control them to ensure that they serve the entire community. Sadly too many politicians have become subservient to the corporations which fund political parties and provide jobs for former and potential ministers. So corporate interests get portrayed as “the public interest” and their priorities dominate domestic and foreign policymaking. Such is the grip of corporations on political life that swathes of publicly owned assets have been sold to economic elites at knockdown prices. The result is wholesale destruction of savings, banking crisis, daily scandals. The myth of shareholder power has created an unbalanced economy which lacks any sense of direction, democracy or any concern for the welfare of society. Corporate power over society should also be reduced by promoting alternative forms of business structures, such as cooperatives, mutuals, not-for-profit and employees ownership.

Austin Mitchell is the Labour MP for Great Grimsby and Prem Sikka is the Professor of Accounting, University of Essex

19 Responses to “The nonsense of shareholder ownership: what we should know”