In 1919, Britain came close to a workers and soldiers uprising. But it’s not a story the official WW1 commemoration wants to highlight. 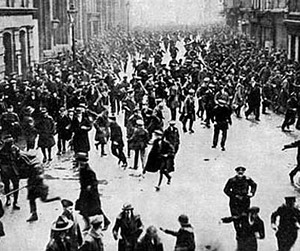 In 1919, Britain came close to a workers’ and soldiers’ uprising. But it’s not a story the official WW1 commemoration wants to highlight

The official 100th anniversary commemorations of World War One (WW1) mostly record a honourable, noble cause fought by happy, loyal, patriotic soldiers. But the truth is somewhat more complex and varied.

The 1914-18 British Army was notorious for its frequent appalling mistreatment of working class lower ranks by arrogant, out-of-touch upper class officers who often exploited ordinary soldiers as their personal servants and, under fire, as expendable military ordnance.

Blind obedience, spit and polish and square-bashing drill were the order of the day. They comprised an excessive proportion of basic training – to the relative neglect of weapon proficiency and tactical exercises.

In the closing months of the war, and on into 1919, there were widespread military mutinies, strikes and riots. Significant sections of the British armed forces were awash with rebellion and revolutionary fervour.

Under the impact of the Russian revolution, from 1917 onwards there were attempts to form Councils of Workers and Soldiers within army units. These were, however, short-lived and came to nothing. But protest and dissent were commonplace.

At Etaples and Boulogne, between September and December 1917, demonstrations and strikes by troops in protest at their appalling mistreatment by the top brass resulted in scores of Chinese and Egyptian soldiers in the British Expeditionary Forces being shot and wounded after they refused to work and tried to break out of camp.

Even more serious and widespread mutinies erupted in 1918 when a total of 676 troops were officially court-martialled and sentenced to death for acts of sedition and mutiny. Though not all these death sentences were carried out, unofficially many other rebellious soldiers were summarily shot on the spot.

The first of the big mutinies on the British mainland occurred in early 1918 when machine-gunners in the Guards staged a mass strike at Pirbright in Sussex. For three days, all soldiers refused duty and instead organised their own voluntary training sessions.

At the end of the year, the spate of rebellions accelerated. On 13 November there was mutiny at Shoreham when troops marched out of base camp in protest at brutality and degrading treatment by their officers. They won. The army responded by demobbing a thousand soldiers the following morning and another thousand each week thereafter.

Among overseas troops, the fervour of dissent was equally pronounced. At Le Havre, Royal Artillery units rioted on 9 December 1918, burning down several army depots in the course of the night. The most sustained mutiny by troops took place at army camps surrounding Calais. Unrest within the units stationed there had been building up for several months beforehand over issues such as cruel and humiliating punishments, the censorship of news from home, and bad working conditions in the Valdelièvre workshops.

There was also discontent over the savage ten-year sentences imposed on five teenage soldiers for relatively minor breaches of discipline, and the harsh regime in Les Attaques military prison, where detained soldiers were flogged and manacled for trivial offences such as talking to each other and were only issued with a single blanket,  even during the severest of winters.

In January 1919 these grievances exploded into agitation for improved conditions and speeded demobilisation. At Valdelièvre camp, troops elected a Soldiers’ Council and called for a general strike. To a man, they refused to go on parade at reveille. Instead of their normal guard duty, troops manned picket lines and set up defensive positions throughout the camp.

At another base in nearby Vendreaux, 2,000 soldiers walked out in sympathy and marched to Valdelièvre as a gesture of solidarity. After a mass meeting, the 4,000 mutineers descended on the army headquarters at Calais and seized control.

Within three days, 20,000 troops had joined the mutiny, including women’s units of the Queen Mary Army Auxiliary. In a wave of spontaneous unionisation, a Calais Soldiers’ and Sailors’ Association was established, which linked with similar soldiers’ committees in other units of the army by affiliating to the newly formed Soldiers’, Sailors’ and Airmen’s Union.

For the duration of the strike, each unit elected delegates to a Camp Committee and each camp in turn sent delegates to the Central Area Committee which coordinated the strike and issued orders from the occupied Calais army headquarters.

This committee secured the support of the local French civilian population, including the railway workers who put an embargo on the movement of all British military goods.

When General Byng arrived with troops to put down the mutiny, his soldiers were unable and reluctant to suppress the strikers and many of them eventually joined the rebellion. Powerless to crush the mutineers, army chiefs were forced to concede to the soldiers’ demands for improved food, new barracks, greater freedom of leave and the abolition of weekend work.

On 3 January 1919, virtually the entire garrison at Folkestone refused to attend reveille in protest at poor food, excessive officer privileges and orders that they return to France. At a huge demonstration, 10,000-strong, the troops voted to form a Soldiers’ Union. The Daily Herald on 11 January described the events as follows:

“On their own signal – three taps of a drum – two thousand men, unarmed and in perfect order, demonstrated the fact that they were fed up – absolutely fed up. Their plan of action had been had been agreed upon the night before: no military boat should be allowed to leave Folkestone for France that day or any day until they were guaranteed their freedom.

“It was sheer, flat, brazen open and successful mutiny. Pickets were posted at the harbour. Only Canadian and Australian soldiers were allowed to sail – if they wanted to. As a matter of no very surprising fact they did not want to. One Officer tried to interfere. He leapt across the gangway and got a rough-house. ‘I am a relative of Douglas Haig,’ one of the officers pleaded. ‘We are all King’s messengers,’ said another party. But nothing of that kind availed them.

“Meanwhile troop trains were arriving in Folkestone with more men returning from leave and on their way to France. They were met with pickets . . . in a mass they joined demonstrators.

“On Saturday an armed guard of Fusiliers was posted at the quays by the Army authorities. They carried fixed bayonets and ball cartridges. The picket approached. One rifle made a show of going up: the foremost picket seized it, and forthwith the rest of the guard fell back.

“The mutineers visited the station in a body, after having posted their own harbour guards, and tore down a large label marked ‘For Officers Only.’

“On Saturday a great procession of soldiers, swelled now to about 10,000 marched through the town. Everywhere the townspeople showed their sympathy. At midday a mass meeting decided to form a soldiers’ union. They appointed their officials and chose their spokesmen.”

Similar soldiers’ protests, strikes, riots and mutinies took place in cities, ports and barracks all over Britain well into 1919. Influenced by their working class and trade union roots – and the strong sense of camaraderie that evolved in fighting units during the war – the military rebels had genuine grievances and felt a burning desire for a fair deal.

Faced with the threat of a generalised rebellion – and talk of revolution – army chiefs hastily improved conditions and speeded up demobilisation. They feared that keeping dissenting troops together and under arms could risk a revolution.

They were right. In 1919, Britain came close to a workers and soldiers uprising. But it’s not a story that the official WW1 commemoration wants to highlight. It might give people the wrong ideas.

For more information about Peter Tatchell’s human rights work, to receive his campaign e-bulletins or to make a donation, visit: www.PeterTatchellFoundation.org

11 Responses to “WW1: The hidden story of soldier’s mutinies, strikes and riots”