The government needs to reduce the costs resulting from lorry activities. 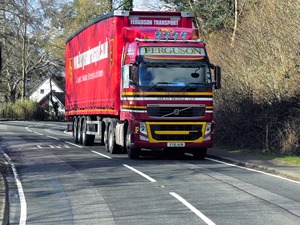 The government needs to reduce the costs resulting from lorry activities

New research commissioned by Campaign for Better Transport has set out why the road haulage industry comes up so far short of meeting its costs and what government should do about it.

Many of our local roads are in a very poor state. Some estimates put the backlog of repairs at £12bn. This backlog hits the economy, causing accidents and congestion.

With the heaviest HGVs estimated to be 150,000 times harder on roads than the a typical car, it is lorries that are the cause of much of this damage.

Public health is another important area. HGVs are five times more likely than cars to be involved in fatal accidents on local roads, making them a blot on an otherwise vastly improved road safety picture. Legally binding carbon budgets mean emissions from lorries matter more than ever.

Government modeling of the impact of lorries has not kept track with changing practice in the haulage sector. HGVs now impose high external costs which are not recovered through taxation. The values put on carbon emissions, pollution and road traffic accidents involving lorries are simply out of date and underplay the latest understanding.

In addition, new values need to be added to the models. ‘Predict and provide’ road building projects planned to accommodate traffic growth including road haulage are having significant landscape and conservation impacts.

Growing awareness of the health impacts of air pollution from transport have shone the spotlight on poor lorry engine efficiency, something not helped by possible delays in the introduction of better cab design after industry lobbying at European level. Links between traffic emissions, air quality and wider public health have already resulted in lower running speeds being introduced through the government’s Smarter Motorways projects, with the likelihood of more to come.

The government needs urgently to reduce the costs resulting from lorry activities. This means having models that more accurately reflect the impacts of the road haulage sector, increase efficiency and lower the 30 per cent of lorries that currently drive round entry. It also means provide an indirect stimulus to other freight options including rail freight.

Without a level playing field across freight modes, the lack of which is exposed by this research,  it remains difficult for rail volumes to expand as it has to compete directly with road on price. The government must recognise that until it removes the subsidy for road and charges HGVs for the considerable costs imposed on society, it should compensate rail freight to the same level.

This can be done by reducing access charges onto the railway (a cost road does not pay) and by continuing the rail freight grants. As with roads, government should also update the values it uses to take full account of the carbon, safety and congestion benefits of shifting traffic off the roads.

By far the biggest barrier to the growth of rail freight remains the shortage of terminals in the right locations to tranship goods between road and rail. Many potential sites for such infrastructure already have private sector backing subject to planning consents.

Government needs to take action to ensure lorries pay their way and rail freight is adequately supported. The alternative is for us all to continue paying for potholes, accidents, congestion and pollution created by our subsidised HGVs.

Andrew Allen works for the Campaign for Better Transport