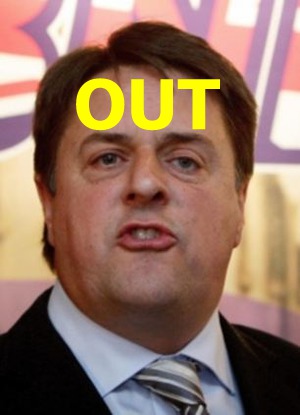 As of last night, Nick Griffin is no longer the chairman of the BNP. Instead, a party apparatchik who until recently worked for two BNP MEPs has taken over. There was no election of course, but Adam Walker – former president of the party’s nationalist ‘trade union’ Solidarity – is the new main man.

Here are a few things you should probably know about him.

1. He chased kids in his Land Rover

Walker was given a six-month prison sentence (suspended for 18 months) and a year-long driving ban after a confrontation with three boys aged between 10 and 12 in 2012. Why? He verbally abused the children, chased them in his Land Rover and slashed their bike tyres with a Stanley knife. Walker admitted a public order offence and three counts of criminal damage and was ordered to pay compensation of £142 to the boys.

Walker also has a conviction for drunk-driving.

2. He took Michael Gove to court. And he lost

Following his conviction for chasing kids, Walker was understandably banned from teaching for life. But Walker cried ‘prejudice’ and took Gove to court after the former education secretary upgraded the two-year ban recommendation of the National College for Teaching and Leadership to a lifetime one. According to the Guardian, Walker had already been disciplined in 2010 after he labelled immigrants “savage animals” on an internet forum using a school laptop, as well as going on the BNP website on school time. But his case was delayed because police feared a riot.

Walker lost his battle against Gove – the judge said he ‘lacked any credible evidence’ for his case.

3. He hates the Gurkhas

Joanna Lumley slammed him and his party as ‘disgusting’ after the BNP used a picture of Gurkha corporal Kumar Pun with a cross through it. Walker was responsible for thousands of leaflets which said: ‘Stop this illegal Gurkha immigration‘ following the Lumley campaign in 2009 to get residency rights for thousands of rejected Nepalese soldiers who had risked their lives for Britain.

In a speech to party activists last year, he described Britain as a ‘multicultural shithole’, and claimed that white Britons were facing a process of ‘ethnic cleansing’.

4. He campaigned for MEP dressed as a soldier…despite no longer being a serviceman

The Daily Star reported in 2010 that ‘Adam Walker wore desert fatigues while campaigning alongside the far-right party’s leader, Nick Griffin’ during the elections – even though he hadn’t served in the forced for twenty years.

Army groups were furious, and Walker risked prison. The MoD were clear: ‘Neither serving nor retired military personnel are permitted to wear uniform in support of political activities as this could undermine the impartiality of the Armed Forces’. The ABF soldiers’ charity said: ‘There is no place in the Army for racism or politics’.

5. He argued that the BNP doesn’t legally exist

Save the best till last and all that. In 2011, the new chair of the BNP argued via his lawyer in court that the BNP did not actually exist as a legal entity – instead its chairman was the ‘final determinator’ (was he preparing for the throne already?). Essentially he was pinning the blame on the then chairman Nick Griffin rather than himself after the BNP reneged on a written agreement that Walker had signed in his capacity as party manager.

Walker had failed to pay his party’s former graphic designer, Mark Collett, £14,000 despite signing a written statement saying he would.

The court threw out Walker’s argument that the chairman, not him, was legally responsible for coughing up – and instead, Walker was forced to pay the full amount plus over £7,000 in legal costs to the now English Democrat party activist.

Following the judgement, a resigning BNP staffer described Walker as ‘nice but dim’. Others said he wouldn’t even understand the judgement.

A bright future for the BNP, then…