Changes to the law show the UK is serious about calling time on forced marriage. 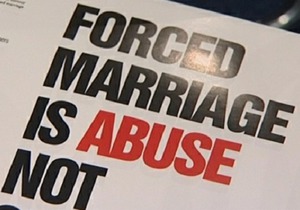 Today marks a big day for upholding human rights and human dignity as a new law in the UK comes in effect criminalising forced marriage.

From 2008 courts have been able only to issue civil orders when faced with incidents relating to marital coercion, but as of today the offence comes with a possible seven-year prison sentence.

Forced marriages are identified as involving physical, psychological, emotional, financial and sexual abuse. From today the Anti-social Behaviour, Crime and Policing Act 2014 lists criminal offences as including taking someone overseas to force them into marriage (whether or not the marriage eventually takes place) and marrying someone deemed to be without the mental capacity to consent.

Forced Marriage Protection Orders, which can be used like an injunction to prevent someone being forced into marriage, can still also be sought after as a civil remedy. Now, disobeying this can result in a prison sentence of up to five years.

The UN Convention on the Elimination of Discrimination against Women (CEDAW), the UN Convention on the Rights of the Child (UNCRC) and the Universal Declaration of Human Rights (UDHR) all address forced marriage and highlight its link to human rights, but as Plan UK have previously said, of the 186 countries that are party to CEDAW some do not always ensure that commitments are implemented and enforced.

Changes to the law demonstrate that the UK is very serious about calling time on letting forced marriage slip under the radar. However, some groups have been less enthusiastic.

Quoted in the Telegraph today, Shereen Williams, director (Project and Strategy) of the Henna Foundation, said: “David Cameron was hell bent on making this a criminal offence but we’re not sure how it will help.”

The suspicion by some is that there will be less incentive for family members to come forward and raise awareness of a potential forced marriage if they suspect that a jail term will result.

Interestingly the Southall Black Sisters, the all-Asian organisation established after the death of anti-fascist activist Blair Peach and a member organisation of the original Home Office working party in 2005 on forced marriage, opposed criminalisation on the grounds that fear of seeing their parents imprisoned would prevent people coming forward.

This view, however, could equally be used to water down Forced Marriage Protection Orders, which would be undesirable.

Writing about the issue, Ruth Gaffney-Rhys, a reader in Law at the Newport Business School, looked at the Bedfordshire Police Constabulary v RU and Another [2013] EWHC 2350 (Fam) case. The details are that a young girl successfully applied for a protection order that stopped her Mother being able to organise a wedding in which a forced marriage would result. In spite of the order the young girl’s aunt arranged the wedding, not the Mother. Police applied for committal for contempt of court but because they had not made the original application were unsuccessful.

Gaffney-Rhys in conclusion says that any attempt to criminalise a person over forced marriage would stop people like the young girl she mentions from coming forward. But protection orders need for girls and women to come forward, too. So the same argument could be equally suggested.

In any case the more positive case might result. While the unintended consequence has been raised many times, more likely is that by criminalising perpetrators of forced marriage the intended effect of stopping people from arranging unwanted and forced weddings will result.

Others have suggested that criminalising forced marriage would make family reconciliation much harder. In a Demos report from 2012 one respondent, an anonymised representative from a woman’s rights organisation, put down this argument by saying the following:

“I understand the viewpoint that criminalisation would close the door to any reconciliation. But what people involved in these marriages tell us is that, once they make the choice to leave, [with the law as it stands now], they know they’ve closed the door behind them, or they know that the door’s going to be shut on them forever.

“So I don’t think [criminalisation] would make a huge difference in terms of reconciliation, but I do think it would take away some of the fear of the professionals involved. It would also be much more workable or tangible for those who are suffering as well, because they would know that they have recourse to this criminal act. It might also be a deterrent for those people thinking about forcing someone into marriage.”

The criticism of criminalising forced marriage overstates the case. You could argue that any proximity to family makes crime reporting difficult. But making punishment tougher on what typically results in heinous crimes, as is the case with forced marriage, will subsequently make crime enforcement better and make someone think twice before carrying out a criminal act.