How exactly did the Times manage to discern that the children in question were believers. 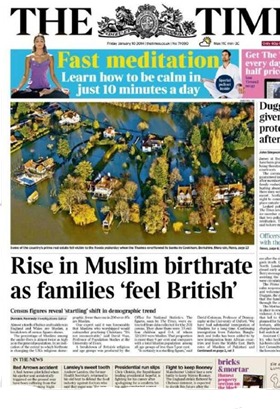 The Times has a strange, scaremongery headline on its front page today warning (at least it comes across like a warning) of a ‘Rise in Muslim birthrate as families feel British’.

This is the sort of thing one expects from the likes of the Daily Mail and Express, so it feels rather strange to see it pasted across the front page of a respectable organ like the Times.

Without trying to guess the ‘motive’ of the paper’s headline writers, there is another problem with this article quite apart from it blurring the distinction between news and scaremongering about ‘birthrates’.

In the opening paragraph of the ‘story’, the Times says the following:

“Almost a tenth of babies and toddlers in England and Wales are Muslim, a breakdown of the census figures shows.”

What on earth is a “Muslim baby”?

What I mean to say is, can we not at least wait until a child is old enough to make their own mind up before we try to deduce with strand of theology they adhere to? I very much doubt it would be ok to write about Communist babies and Tory babies; so why, then, is it ok to do so with religion?

This sort of thing is not unique to Islam of course; and I can already hear the counter argument: that the children in question are ‘culturally’ Muslim rather than necessarily believers.

Again, though, if it is about culture rather than religion, would it be acceptable to label babies in this fashion based on the political ‘culture’ of their parents? I very much doubt it.

And anyway, in the third paragraph the Times has the following to say:

“One expert said it was foreseeable that Muslims who worshipped would outnumber practising Christians.”

So it isn’t about culture at all, but rather refers to practicing, worshipping and believing religion.

In which case I’d like to know how exactly the Times managed to discern that the children in question were believers.

25 Responses to “What exactly is a ‘Muslim baby’?”