Oxfam has cancelled an event after Left Foot Forward presented the organisation with homophobic and anti-semitic comments made by one of the organisers. 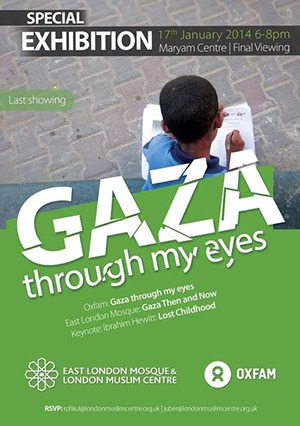 Oxfam has cancelled an exhibition which was due to take place on Friday after Left Foot Forward presented information to the charity detailing homophobic and potentially anti-semitic comments made by one of the organisers.

The ‘Gaza: Through my Eyes’ exhibition was due to be hosted by Oxfam and Ibrahim Hewitt, a trustee of the Hamas-linked organisation Interpal who has called for the punishment of apostates and homosexuals.

Mr Hewitt has previously referred to the “so-called Holocaust” and has written that homosexuals would suffer “severe punishments” in an Islamic state for their “great sin”.

The event was scheduled to take place at the East London Mosque, notorious for hosting a number of extremist speakers.

Speaking to Left Foot Forward, Oxfam said it was “strongly committed to upholding universal human rights” and would therefore be cancelling the event.

“We believe that nobody should face discrimination due to their sexual orientation. We are concerned at comments about homosexuality attributed to Mr Hewitt, of which we were previously unaware, and the event has now been cancelled.

“The ‘Gaza through my eyes’ event – an exhibition of photographs taken by children in Gaza – shows a powerful perspective of life for a lost generation of youth growing up under blockade, and we look forward to working with the East London Mosque/London Muslim Centre to show the exhibition in future.”

Human rights campaigner Peter Tatchell told Left Foot Forward that, while Oxfam’s cancellation of the event was welcome, “it is hugely disappointing that it did no proper checks on him [Mr Hewitt] before agreeing his presence”.

“Far worse is the willingness is the East London Mosque/London Muslim Centre to host Hewitt, after promising many times that it would vet speakers and exclude those with homophobic and other extremist views. I am losing faith and trust in the ELM/LMC. Only last September they allowed another homophobic extremist to preach, Ismail Menk – and only reacted when this was exposed,” he said.

Update —– Mr Hewitt has claimed that the comments were “very old” and taken “out of context”. 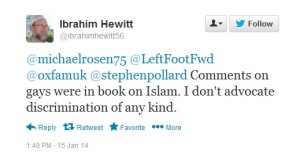