Let us all pause this Christmas to consider those who will not be able to freely express and follow their religion. 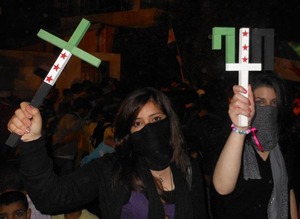 Earlier this year the former Archbishop of Canterbury George Carey argued that David Cameron and his government is somehow adding to a sense of Christians feeling persecuted.

I have many differences with David Cameron and oppose a number of policies that he and his ministers are adopting, but to argue that I feel persecuted in this country would be to stretch things too far.

Yes there are those who strongly oppose and reject Christianity. Many who have responded to postings I have had up on Left Foot Forward of late have left comments making their objections perfectly clear.

But the fact is that I need not fear that. Indeed, I take heart from the fact that Jesus’ declaration that the world will reject those who follow him in the same way that the world rejected him by nailing him to the cross is a sign of his teachings being true.

So this Christmas, I can feel blessed at the freedom that I enjoy. But it will be a Christmas full of prayer for those Christians this year who have faced unimaginable consequences for their faith.

I will be praying for those Christians in Nigeria who continue to face the dangers posed by Boko Haram who since May have killed over 1,200 people in their crusade against Christianity. Among the many atrocities witnessed in the country was one carried out in August, which saw 16 Christians in the North Eastern city of Biu handcuffed within the precinct of their church so they could not escape as members of Boko Haram burnt them alive.

I will continue to pray for the family of Mariam, the 15 year old Syrian Girl I have frequently mentioned who, because of her faith, was captured earlier this year by the al-Nusra Front, raped by a different person every day for 15 days and then killed.

Then there are the families of the seven Christians found earlier in Homs in Syria who, again earlier this year, having been tortured were later found, having been beheaded.

As US and UK forces prepare to leave Afghanistan next year, I will be praying for the Christians in that country, a country in which one of its MPs has called for the execution of those who convert to Christianity.

I will be praying for Christians in Pakistan, still reeling from the country’s worst ever attack on them in September, which saw 85 killed and 100 injured following multiple suicide bombings by groups close to the Taliban at the All Saints Church in Peshawar.

And I will be praying for Christians in North Korea, the most difficult country in which to follow Jesus Christ. In November, it was reported 80 people had been executed, some of whom simply because they possessed a bible.

I can anticipate the kinds of reaction I’m going to get to this from some readers, many of whom will no doubt conclude that Christians somehow bring it on themselves.

My response is fairly simple. The world around us is one that so often seems hopeless, one in which our political leaders so often seem to be out of their depth. For Christians, faced with such a bleak picture, the hope is of a place without such pain and heartache, a place where, as the book of Revelations declares:

“There will be no more death’ or mourning or crying or pain, for the old order of things has passed away.”

Whatever one’s views of Christianity might be, can we not, this Christmas at least, unite in appreciating the sheer cruelty of taking that hope away from people and resolve that, as a country that enjoys the freedoms that I and many other Christians enjoy, we should use all levers possible to secure that same freedom in other countries, many of which we have close trade and diplomatic relations with.

Whilst Jesus predicted that those who follow him would be rejected by the world, that should not be interpreted as an open invitation for organisations and governments worldwide to actively persecute in such cruel ways.

6 Responses to “Spare a thought for persecuted Christians this Christmas”