We must address the failed experiment with Police and Crime Commissioners. 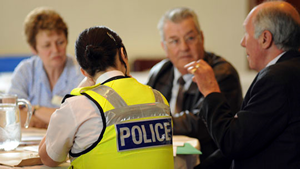 On Monday, the Independent Police Commission launched its report, Policing for a Better Britain. Chaired by Lord Stevens, the Commission brought together leading figures from the police, academia, business and civil society to tackle the deep challenges that confront the police today.

Over two years, we have held witness hearings and public meetings, surveyed police officers, staff and the public, and commissioned over 30 background papers. The result has been the most extensive examination of the police service in England and Wales since the 1962 Royal Commission. In effect, we have been the Royal Commission on the Police for which many have been calling.

Our report sets out a bold and radical vision of how to deliver better policing in straitened times. Our vision is of a police service that is professional, democratically accountable and serving the common good.

We set out a new deal for police officers and staff combining reform of working conditions with fairness at work. We outline measures to forge the police into a profession including a new role of chartered police officer. We propose a new Independent Police Standards Commission to deal effectively with complaints and raise standards. We make proposals to clear-up the mess that is police procurement and lay out principles to guide police collaboration with the private sector.

The golden thread of our report is that local policing is the building block of policing by consent. We propose a radical localisation of policing in England and Wales. Since 2010, the government has made much of its commitment to locally responsive and accountable policing. But it has chosen the wrong means to deliver this. We believe there is a better way.

This requires that we protect and focus neighbourhood policing during times of fiscal restraint. Neighbourhood policing is being hollowed-out, reduced to a name-plate on a door. It is compromised by the government’s myopic insistence that the police are ‘crime-fighters’. The police risk a retreat to a discredited model of reactive policing.

We need to reclaim the Peelian idea that the police mandate is to prevent crime, harm and disorder. We propose a ‘local policing commitment’ which includes a guaranteed minimum level of neighbourhood policing. We aim to create a police service that listens closely to the demands of all communities and treats people with dignity and respect, while focussing resources where they are most needed and can do most good.

We must also address the failed experiment with Police and Crime Commissioners. There are Police and Crime Commissioners doing good work. But this new office remains unpopular and most Commissioners are unknown to the public. Their first year of operation has been riddled with poor practice in terms of appointing staff and working with chief constables. These are not teething troubles. They are systemic flaws of a model whose proponents mistakenly believe that a single elected individual can effectively hold an entire police force to account.

We propose that this experiment be discontinued at the end of the term of office of the 41 serving Commissioners.

Police and Crime Commissioners should not be abolished just to save money. Nor should we reinvent police authorities or return to trying to run the police from Whitehall. Instead, we need to find better ways of giving effect to the principle of democratic governance.

Our clear recommendation is to devolve these powers to lowest tier local authorities. These authorities should have the power to spend some of the police precept, be given a voice in the appointment of local police commanders, and formulate policing plans for their town, city or borough. At the force level, we propose options for creating a Policing Board of elected politicians to set the strategic priorities of the police and hold chief constables to account.

These proposals to radically localise policing will create the conditions for a sensible public debate about structures. There is broad agreement that the present structure of 43 forces is no longer cost effective or equipped to meet today’s crime challenges.

Yet there is no consensus about a better alternative. We believe there are three serious candidates for change: locally negotiated mergers, regionalisation, or the creation of a national police service.

All three options need to be costed and scrutinized.

If we embed the idea that localities are the cornerstone of good policing, and create effective arrangements for making the police locally responsive, we can have a much needed discussion about structures free from the fear that creating fewer, larger police forces will mean less local democratic accountability.

6 Responses to “Why PCCs must go: a better way to do local policing”