Members of the Legislative Assembly (MLA) at Stormont yesterday approved a motion raising 'extreme concern' at the suggestion that Sinn Fein President Gerry Adams was involved in the disappearance and murder of Jean McConville. 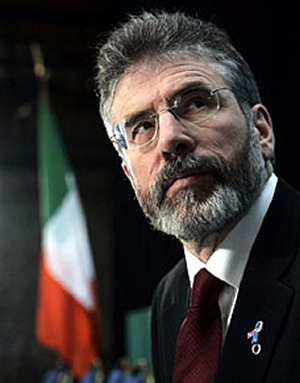 As Northern Ireland’s attorney general John Larkin today calls for an end to prosecutions against those found culpable of atrocities committed during the troubles, Members of the Legislative Assembly (MLA) at Stormont yesterday approved a motion raising ‘extreme concern’ at the suggestion that Sinn Fein President Gerry Adams was involved in the disappearance and murder of Jean McConville.

Ms McConville was one of the victims highlighted in a recent BBC/RTE documentary, reported on by Left Foot Forward, into the ‘disappeared’ – those abducted, murdered and buried secretly by republicans during the troubles in Northern Ireland.

Proposing a motion which named Gerry Adams and committed the Assembly to standing with the affected families who “have suffered greatly as a result of the actions of republican terrorists”, UUP Leader Mike Nesbitt praised the documentary as “probably the finest piece of television journalism concerning the Troubles that I have ever seen”.

Making his case against Sinn Fein, Nesbitt told the Assembly:

“The second element of the motion refers to the programme’s allegations about the involvement of the Sinn Féin president in the murder of Jean McConville. The latest finger to be pointed his way comes from beyond the grave in the shape of Brendan Hughes, a man who, at one time, was surely closer to Gerry Adams than any other terrorist.

It is the most serious of allegations, but there was more to the programme than an allegation about Gerry Adams’s involvement in the abduction, torture and murder of Jean McConville and the disposal of her body without allowing her very large family the comfort of a funeral.  There was also the input of Billy McKee, a 92-year-old man, who, to use horribly mixed language, is republican royalty. Billy McKee has no problem acknowledging that he was a founding member of the Provisional IRA.

Proposing an amendment to the motion which would have taken Gerry Adams name out of it altogether, Sinn Fein MLA Mitchel McLaughlin urged unionists to accept his amendment in the interests of “unanimity on this vital matter”. He explained:

“We have, of course, debated this issue on a number of occasions, and what characterised that debate was that, although we may largely repeat points, there has always been an all-party agreement on the requirement for those who have information, no matter how little, to make it available to the commission so that the continued agony of the families of the disappeared can be alleviated.

“That is, until today’s debate. The motion from the Unionist Party, particularly with its reference to Gerry Adams, is, perhaps, ill-judged and not properly thought through. However, it could equally be deliberately designed to fragment the unanimous support of the Assembly over a long time for the families of the disappeared. If that is the case, it would be very regrettable.

“Obviously, Sinn Féin cannot support this motion as presented. Our amendment is designed to redirect us back to the commitment to the families of the disappeared. I appeal to the Unionist Party to accept our amendment in the interest of unanimity on this vital matter.”

Outlining his party’s support for the UUP motion, the DUP’s Peter Weir sought to get across to members the horrors that the disappeared faced:

“Let us be absolutely clear about this: we talk about the disappeared, but perhaps a clearer term is those who were abducted, brutally tortured and murdered. Among the many evils that were perpetrated during the Troubles, this was one of the greatest that was inflicted on our society. For families, the knock on the door and the abduction of a relative – a son or a daughter, a mother or a father – is an unimaginable horror.

Indeed, as has been indicated, sometimes, when violence is talked about, the phrase ‘mindless thuggery’ is almost dismissed.  The reality is that this was very well thought through. It was, as has been indicated, a deliberate policy by which principally republicans sought control over areas. It was a policy by which, mistakenly, they sought some form of petty revenge on people in their community, and one through which they wanted to establish terrorist supremacy.”

Unionist, Alliance and SDLP votes combined saw the final motion to be passed noting with ‘extreme concerns’ the allegations of Gerry Adams’ involvement.