Nahla Mahmoud writes about apostasy laws around the world, what they are and why they shouldn't exist in the twenty-first century. 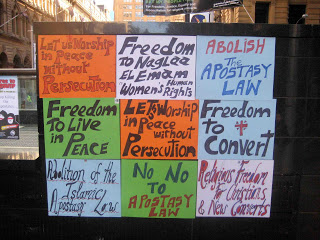 It is absolutely ridiculous in the twenty-first century to have laws where one could be criminalised and punished for thinking differently or expressing an opinion.  Just this year, Kuwait jailed Abdel Aziz Mohamed Albaz for criticizing Islam, Tunisian artist Nadia Jelassi is facing prison for her ‘un-Islamic’ artistic pieces, Moroccan activist Imad Alhabibi was arrested for being an ex-Muslim, and Saudi activist Raif Albadawi was sentenced last week to seven years and 600 lashings for airing his liberal views. These were in addition to the many others whom I blogged about earlier this year.

In Islam, apostasy is commonly defined as the rejection in words or action of one’s religion by a person who was previously a Muslim. As simple as this might sound, the definition is quite broad and could include not only renouncing Islam, but also criticising or defaming the religion and ‘attempting’ to lead others away from it. It is also broad enough to include liberal and progressive Muslims who challenge traditional Islamic thoughts. Cases such as that of the late Egyptian thinker Nasr Hamid Abu-zaid who fled the country after being charged with apostasy for his critical Islamic writings and Sudanese theologian Mahmoud M. Taha who was hanged in the centre of Khartoum for expressing his progressive Islamic thoughts are just two examples among many others. Terms such as Kafir/a, Murtad/a and Zendeeg/a are specifically designed to label individuals who challenge Islam and to encourage action to be taken towards them. Ebn Warraq spells this out in his book ‘Leaving Islam: Apostates Speak out’.

As I am speaking now, more than 19 Islamic states and Muslim-majority countries consider apostasy to be illegal and to merit a form of punishment. Many of these, including Iran, Sudan, Saudi Arabia, Egypt, UAE, Somalia, Afghanistan, Qatar, Yemen and Mauritania have a death penalty for those who renounce or criticize Islam. Other countries like Malaysia, Morocco, Jordan and Oman consider it illegal and have in place other forms of punishments, such as fines, imprisonment, flogging and exclusion from civic or family rights like child custody.

Through the trial process, apostates are usually given a chance to publicly repent. They have to declare their guilt and vow never to repeat this act.  The cases of Saudi Arabian journalist Hamza Alkashgari and the 129 Sudanese in south Khartoum are among those reported to have been forced to publicly repent to avoid the death penalty. If those charged insist upon apostasy, the court will then implement a punishment. This could be a fine, a prison term or a number of lashings. Failure of the authorities to take action means that groups and individuals can take it upon themselves to carry out a sentence. Random apostasy Fatwas by Imams and attacks by organised groups such as the ‘El-Shabab’ movement in Somalia, ‘Amr blmaroof w nahy an Elmonkr’ in Saudi Arabia and ‘Buku Haram’ in Nigeria are usually accepted and not questioned by local authorities.

As for the UK, a worrying pattern of aggressive attitudes toward ‘apostates’ has appeared recently.  A survey by Policy Exchange investigated the perception of a number of Muslim communities toward the death penalty for apostates.  Thirty-four percent aged 16-24 believe that apostates deserve a death penalty. This goes along with the recent documented cases of Islamic threats of violence. Among these were the threats directed towards the spokesperson for  One Law for All campaign, Anne Marie, in a lecture where she was debating Sharia law and human rights; threats made against Tom Holland after broadcasting his documentary ‘The Untold Story About Islam’; threats made against the Atheist, Secularists and Humanist Society at UCL for posting a ‘Jesus and Mo’ picture on their Facebook page; and intimidatory remarks towards 17-year-old Rhys Morgan for his “offensive” ‘Jesus and Mo’ drawing at school. I myself have received death threats after an interview on Sharia law implementation in the UK broadcast on Channel 4 earlier this year.

There is, however, a significant effort being made by some liberal Muslim organisations and individuals. The British Muslims for Secular Democracy and Muslims for Progressive Values are doing a great job of challenging political Islam and promoting secularism.

To conclude, calling people apostates and ‘kofar’ while it is jailable and punishable by death in most Islamic states is not freedom of speech. It is shameful enough still having such laws in practise in an era of enlightenment, let alone having apologetic lefties and pro-Islamism liberals who justify this behaviour. We are indeed facing a long battle against religious dogma and discrimination until these disgraceful laws are dismissed and attitudes are changed.  But let’s ensure that in the meantime authorities, groups and individuals who use these labels as weapons to silence others or to justify their existence are also challenged and embarrassed in public. There is no gray area here – you either condemn apostasy or you don’t.

7 Responses to “Opinion: Islamic Apostasy Laws – A Big Disgrace in the 21st Century”