UKIP leader Nigel Farage has endorsed an article by the party's health spokesperson which calls for people to be allowed to pay to skip A&E waiting times. 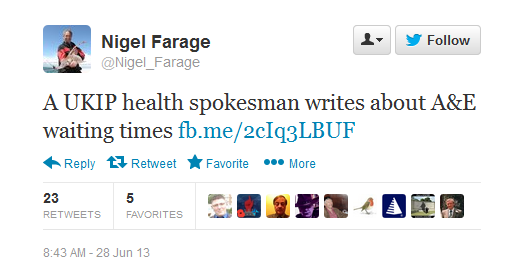 UKIP leader Nigel Farage has endorsed an article by the party’s health spokesperson which calls for people to be allowed to pay to skip A&E waiting times.

Last week Farage tweeted an article by John Stanley, a surgeon and UKIP candidate, referring to Stanley as a “UKIP health spokesman”.

“We should accept that if a triaging clinician feels we don’t need treating within two hours required for standard cases then we be either willing to pay or willing to wait longer so cases most deserving are treated best. People should pay a higher charge if they haven’t registered with a GP as being directed back to primary care avoids unnecessary A&E visits.”

Stanley added that under UKIP people who qualify for free prescriptions would be exempt from the flat fee – but only if they haven’t been drinking.

“The same exceptions as for the prescription charge could apply unless the patient was drunk and disorderly or incapable.”

Drunk and incapable? Sounds like one of Farage’s MEPs.

In summary, among other things UKIP would: