At last a well orchestrated campaign by a small group of Islamic zealots has succeeded in closing the licit importation of khat, the mild naturally occurring stimulant that has been used in Ethiopia, Kenya and Yemen for millennia. 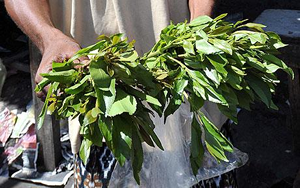 By Dr Axel Klein, an internationally recognised expert on khat who works at the University of Kent

At last a well orchestrated campaign by a small group of Islamic zealots has succeeded in closing the licit importation of khat, the mild naturally occurring stimulant that has been used in Ethiopia, Kenya and Yemen for millennia.

Since large number of Somali refugees arrived in the UK in the 1990s, the trade in khat picked up significantly. Several times a week planes fly in from Nairobi and Addis Ababa to supply hundreds of mafrishes – khat cafes – and green grocers all over the country.

The trade has provided hundreds of UK Somalis with a livelihood, and their countrymen with a peaceful and agreeable past time.

For Islamic campaigners this has long been a thorn in the flesh of the community. Mafrishes are public spaces, where discussion ranges widely and freely, as friends gather to relax and enjoy. At a time of rising hostility and nationalism making the assimilation for even second or third Generation British Somalis more difficult, such spaces come at a premium.

In Somali neighbourhoods like Tower Hamlets of Lambeth these mafrishes were the strongest organised opposition to the grip held by Islamic organisations over the community.

Different attacks on the health hazards or the social harm all failed to yield a result. The Advisory Council on the Misuse of drugs reviewed the evidence on three different occasions and recommended that it did not merit the status of a controlled substance. What finally convinced the home secretary was the alleged link between khat use and terrorism.

The idea was ingeniously floated by Abukah Awale – who signs off as ‘a leading anti khat campaigner’ – a couple of years ago, with stories of Islamic radicals recruiting followers in the mafrishes. When questioned in 2012 by the Advisory Council on the Misuse of Drugs (ACMD) subcommittee he had to admit that he knew of a single incidence, and that happened to the son of someone he knew – in Kenya.

Undeterred by lack the evidence Awale developed the theme after the Woolwich attack on Lee Rigby, telling the Mail on Sunday that one of the attackers had been a khat chewer.

This time he had a national audience and a government crisis to advance his cause.

As he has admitted many times, Awale is no expert on pharmacology, medicine or policing, but he is a self proclaimed former addict on a mission.

Like many crusaders Awale is undaunted by trivial complexities like missing evidence or distorted facts. Instead he just carried on, complaining about the evils of khat to all who’d listen until a brutal murder in South London provided him with the opportunity.

“This is the tool for me, I will put this on the table and say, ‘Now you must act’. When this country hears terrorism, they will act,” Awale admitted to the Independent last year.

Precedence over the determination of the ACMD makes a mockery of evidence-based policy making.

As serious is how it unwittingly plays into the hands of Islamic extremism and leaves moderate Muslims high and dry. The radicalisation of the young will now be reinforced by two predictable trends: Muslim men stopped, searched and arrested for khat offences by zealous police officers; and the outraged siblings of those, who with no legitimate alternative, will embrace the most indulgent aspects of western culture.

Sadly, the slow, painful path towards criminalisation was inevitable once khat had been framed as a ‘drug’. It demonstrates that many policy makers are undeterred by evidence or consequence as long as they fall into line with standard practice.

These reflections on malfunctions in the democratic process will not trouble the orchestrators of the anti-khat campaign. A Conservative home secretary with backbench support has just handed radical Islam their first political success in the UK. Let her be remembered in Friday prayers.