Free speech is not designed only to allow tolerable attitudes. We do, however, expect elected representatives to uphold certain values – should they speak otherwise we are in our rights to demand they stand down from their position. 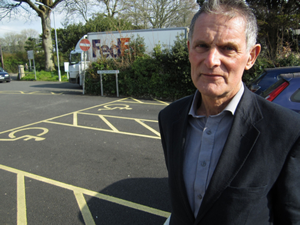 Free speech is not designed only to allow tolerable attitudes. We do, however, expect elected representatives to uphold certain values – should they speak otherwise we are in our rights to demand they stand down from their position.

Speaking in defence of the most vulnerable in society requires nothing less from us.

A moment where a personal button was pushed for me occurred with Colin Brewer, elected councillor in my county of Cornwall.

Brewer said that there was a good argument for killing some disabled babies.

In other words, he may have allowed for my disabled brother to have been killed at birth, like a defective animal on a cost benefit analysis that an impaired human life may prove less viable than other public services.

For nearly thirty years I have seen attitudes to the disabled in this country change so much for the better. From when as a child we would be asked to leave a public restaurant because my brother fidgeted in his seat. Now barely anyone batters an eyelid to his exuberant mannerisms, and those few that do are the ones that move.

The disabled have become visible, and the support of the public to family carers like myself means the world. The Paralympics were celebrated in the UK not as a sideshow but as a major sporting event.

However I have to face some inconvenient facts about what Brewer has done.

Colin Brewer made his ‘killed at birth’ comments in October 2011. He made them to Theresa Court, of Disability Cornwall. Her formal complaint two days later took nearly a year and a half to resolve, with the independent standards board finally ruling he needed to make an apology.

When so ordered, he used a second class stamp, folding the letter into eight pieces. Throughout the process he saw no reason to apologise. One wonders he did not make use of origami to shape the letter into two fingers.

In February 2013, very much playing the hapless victim of the media, he resigned.

Yet he came back to stand in the following May elections where he won by a handful of votes once again as an independent candidate. Even with British public vilification, national and local media clearly stating his views of the disabled he was re elected, beating the Liberal democrat candidate by a small margin.

Not even a week after re-election Colin Brewer proved the creator of his own downfall in this interview published 8 May 2013, given to Disability News Service (DNS).

Reading the transcript Brewer is trying to sound like he values human life, then failing when there is a budgetary consideration to be made, or a defect. However it is unclear who he thinks should be making the decision at birth – the mother, the doctor, the state – regarding termination.

Yet that question of who decides is at the heart of the infanticide debate between parental rights, state eugenics and an absolute right to life.

We had similar arguments at university when we covered Peter Singer’s Practical Ethics in Contemporary Philosophy. Free speech meant that we considered the consequences of finite resources and rights-to-life issues. For the record, Singer says parents alone should make the decision and if they chose life they and the child should be fully supported.

I did not study to be told I was right in my thinking, but to scrutinise and be challenged so I knew how and why I stand for the things I do.

A possible police inquiry into whether an offence was caused in the DNS interview, and a report by Cornwall Council criticising his remarks finally proved too much for Brewer. On 10 July he handed in his resignation to the council.

The ability to deselect a candidate may be useful, but given Brewer was reelected it is not a useful mechanism in this case.

I doubt that Brewer will be prosecuted given he did not make clear who makes the decision on infanticide – journalists failed to see the significance in asking that question. But his views made him unsuited for public office.

Like Brewer I do worry what will happen if I as a carer die before my brother. My trust is that the good people of this nation would in that situation honour the choice I made in life and my brother’s quality of life to support and to do the best they can, and look out for his best interests.

As a society we must ensure that things like Winterbourne View never happen again, because the vulnerability of those with severe learning difficulties is what makes them a target for abuse and neglect.

I will be honest with you, though – we have a big ask ahead of ourselves here.