In this week’s big political interview on the Andrew Marr show, David Cameron showed clear contempt for the public by giving patronising responses to questions about the role played by a Tory advisor in government decisions. 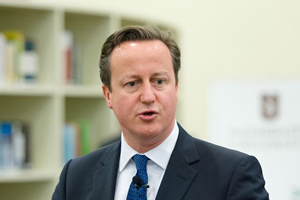 In this week’s big political interview on the Andrew Marr show, David Cameron showed clear contempt for the public by giving patronising responses to questions about the role played by a Tory advisor in government decisions.

Lynton Crosby is strategist to the Tory party, and questions have been raised about his role in the government’s decision to scrap plans to introduce plain packaging on cigarette boxes given his links with the tobacco industry.

There are also concerns about Crosby’s advisory activities with a private health care company in relation to the NHS.

However Cameron assiduously side-stepped questions about whether he had discussed the proposed tobacco strategy with Crosby.

“So can I ask you again whether you have actually talked to him (Crosby) about this issue?”

“Well I think it is important this issue of lobbying because, well look, let me be clear he has not intervened in any way, on this or indeed on other issues and the decision, it’s very important people know this, we haven’t actually changed our policy, I mean, I think there are merits to plain paper packaging for cigarettes, we need more evidence, we need greater legal certainty, we’re not going ahead with it right now,  but I certainly don’t rule it out for the future.

“So the whole thing actually, from start to finish has been something of a media invention. So, he hasn’t intervened, it would be wrong for him to intervene in any way, the decision was actually taken by me, sitting up there (points towards building in No. 10) at my kitchen table, let’s not move ahead with this now, we don’t have enough evidence, there’s too much legal uncertainty.”

“But let’s be clear, this government has been very tough on tobacco, you know we have said we’ve got to cut down on these vending machines, we’ve got to stop big shops doing big promotions, we’ve carried on with the smoking ban, we’ve put up the price of cigarettes, and if we’re too much in hock to the lobbyists as it were, why have we just published a lobbying Bill?”

“You have told me absolutely everything except the question that I was asking, which is have you talked to Lynton Crosby about this?”

“I have answered the question; he has not intervened in any single way.”

“You haven’t actually prime minister, but you won’t tell me whether you have talked to him about it?”

“I think as I’ve said, he hasn’t intervened in any single way, I think you’ll find that is an answer.”

“Yes, but its not quite an answer to the question I asked.”

“But Its all you’re getting (laughs).”

Cameron’s tone is similar to one he probably uses with his children, with a clear undertone of ‘now don’t be a naughty boy, I’ve told you what you have to believe, now run off and play, there’s a good boy’.

The public, and the electorate deserves better.