Instead of engineering a revival of the media magnate, whose party is now ahead of the Democrats in the polls, Italy's Pier Luigi Bersani should be trying harder to woo Beppe Grillo, who, despite his contradictions and megaphone political style, has a programme that is much closer to the traditions of the Democrats. 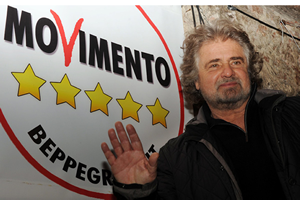 Things are not going at all well for Italy’s centre-left leader Pier Luigi Bersani.

This week Bersani chose to back a candidate, Franco Marini, for President that split his party and failed to garner enough votes to project him into the job as head of state, leaving egg all over his face.

This isn’t simply a case of an leader’s personal ineptitude. It’s a story of the centre-left’s enduring vice of looking right both for its political ideas and its allies, when it should be looking left.

In the same way that Bersani spent far too much time attacking Grillo during the election, when he should have been focusing fire on Silvio Berlusconi and former European Commissioner Monti, the leader of the Democrats on Thursday urged his party to chose Marini, an 80-year old former senate speaker and christian democrat, simply because the billionaire media magnate backed him too.

The party base, as well as the powerful Democrat Florence mayor Matteo Renzi, instead favour Stefano Rodotà, who hails from the once communist wing of the Democrats, like the outgoing President Giorgio Napolitano. Rodotà also has support from Democrat ally Nichi Vendola, the left-wing Governor of Puglia. And crucially, Rodotà is backed by Grillo.

The professor in law is by no means a radical, but he has been a strong and early critic of European inspired austerity measures that have been devastating the economy, such as the lethal budgetary straightjacket of the Fiscal Compact brought in by Italy, among other EU countries. Rodotà has also got the advantage of having maintained a certain distance from national politics, sitting in the European Parliament.

Furthermore, he’s championed the democratizing potential of the Internet, a profile, together with his squeaky clean record among a political class mired in corruption, that has gained him respect with comedian-blogger Grillo and his followers who’ve made widened access to the web and the fight against sleaze their leitmotifs.

In the first vote among national and regional lawmakers Thursday, Marini fell far short of the required two-thirds majority, thanks to a Democrat rebellion, while Rodota gained a respectable 240 of the 1,007 electors in the first vote. Subsequent votes, expected to run into the weekend, require a simple majority and Grillo, as well as Vendola have pledged to continue to back Rodota. With Marini dropped, Friday will see the Democrats select a new official candidate.

So why has Bersani risked splitting the party, and his own leadership position under threat from the young Renzi, over the election of a largely symbolic post?

One answer is that securing a new government is now dependent on securing a new President, who not only has powers to dissolve parliament and call elections, but also, in times of political upheaval such as these, has a role in banging heads together to force the creation of a government.

Another is that he’d given up trying to do business with Grillo after efforts to come to a deal to form a government with the four year old Five Star Movement failed, with Grillo declaring Bersani a ‘dead man walking’.

The return of Silvio Berlusconi

Or it may simply be that, despite strenuous public statements he’s not for a ‘grand coalition’ favoured by Il Cavaliere, Bersani can’t help but repeat the mistakes of the past, and cosy up to one of Italy’s richest, and most sleaze-ridden citizens.

Since November 2011 Berlusconi and Bersani have effectively governed together, providing parliamentary support to former European Commissioner Monti, whose punishing austerity measures and deregulatory reforms have made him highly unpopular, and caused the groundswell of support for the Five Star Movement.

Doing deals with a man with perennial legal problems – he was convicted for tax fraud in October last year – and with such a glaring conflict of interest – between his huge business and particularly media interests, comprising control of private TV – has been the undoing of the centre-left since the early 1990s, when Berlusconi ‘entered the field’.

Massimo D’Alema, one of Bersani’s predecessors, and still a force in the party such that he’s been name as a possible candidate for President, handed Berlusconi a get out of jail card on several occasions.

Instead of engineering a revival of the media magnate, whose party is now ahead of the Democrats in the polls, Bersani should be trying harder to woo Grillo, who, despite his contradictions and megaphone political style, has a programme that is much closer to the traditions of the Democrats.

The Five Star Movement is strong on the environment, opposed to privatising public services, committed to universal access to state education and heath, opposed to European inspired austerity and committed to a ‘citizen’s wage’ to tackle widespread poverty, as well as a clamp down on the kind of corporate cronyism and excess that helped lead to the 2008 financial crisis. There’s plenty of important policies missing from Grillo’s programme, including the attitude to Monti and Berlusconi’s deregulatory labour reforms and taxation in a country with 280 billion euros a year in tax dodging, but the Democrats are equally flawed on that front.

Furthermore, Grillo’s scourge against the Italian political establishment, often dismissed as Pirate style ‘a-politics’, in fact revives the moralizing crusade that was once championed by historic communist leader Enrico Berlinguer, but has all but been forgotten by left leaders since. Unsurprisingly, although Grillo stole votes from across the political spectrum, there’s more left-wingers supporting him that right-wingers.

Grillo, not in parliament himself, but directing things from his hugely popular blog, is not an easy man to do business with. But his backing for a Democrat as head of state is a sign that his ‘no prisoners’, highly partisan approach may be softening. The alternative to a fresh bid at working with the Five Star Movement is getting into bed with the nemesis of democracy, to sooth the dreaded ‘markets’. That cannot be in the interests of the Italian people.

One Response to “Italian politics: Pier Luigi Bersani should be trying harder to woo Beppe Grillo”