Britain’s number one tennis player, Andy Murray has waded into the world of politics, by urging fellow Scots to use their heads rather than their hearts in deciding whether to become an independent country. 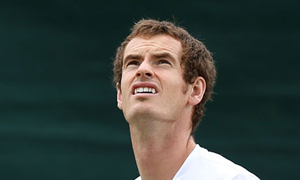 Britain’s number one tennis player, Andy Murray has waded into the world of politics, by urging fellow Scots to use their heads rather than their hearts in deciding whether to become an independent country.

Whilst not making clear how he would vote, Glasgow born Murray used an interview over the weekend to conclude that Scots should not “judge the thing on emotion but on what is best economically for Scotland”.

It provides a strong hint that the US Open champion is not convinced by the Alex Salmond’s campaign which is based largely on a feeling that Scotland needs to go with its heart and reject Westminster rule.

“You need to figure out what’s best for the country and then come to an opinion.

“I want to read more about the issue. I don’t think you should judge the thing on emotion but on what is best economically for Scotland.”

“You don’t want to come to a snap decision and then see the country go t**s up.

“I am proud to be Scottish but I am also proud to be British. I don’t think there is any contradiction in that.”

His intervention in the debate on Scotland’s future comes as those opposed to independence appear finally to have settled on what steps to take following what currently looks likely to be the rejection of the SNP’s dream.

The Sunday Herald over the weekend reported that all three of the UK’s main political parties will go into the 2015 General Election promising a full constitutional convention to reach a settled UK wide settlement.

Declaring that Scotland’s referendum “should not be seen as the end of the process”, Sir Malcolm Bruce, the Lib Dem MP for the Scottish seat of Gordon, has been quoted as saying:

“We have got to a point, assuming after the referendum Scotland stays in the UK, where we have different sets of powers in Scotland, Wales, Northern Ireland and England; in many cases, UK ministers are English ministers. We need a constitutional convention to work out how those powers are best distributed.”

The development comes after the House of Commons Constitutional and Political Reform Committee backed such calls for a fundamental review of the UK’s constitutional arrangements. Arguing that there is a pressing need to do something given the failure of devolution in Scotland, Wales and Northern Ireland to take into account what should happen in England, the Committee last week noted:

“Changes over the last 15 years have continued to alter our political and constitutional arrangements at a rapid pace. Some believe that the time is right to step back and consider what effect these constitutional changes have had on the UK as a whole, and what the future of the Union could look like.

In short, it is time to conduct a comprehensive review so that the Union can work well in the future. The forthcoming referendum on Scottish independence, and the need to answer the “English Question”, reinforce the need to consider what the Union will look like in five, 10 and 50 years’ time.”

The calls for a comprehensive convention have been led also by Welsh first minister, Carwyn Jones who in January called for such a convention out of fear that UK’s future was being dominated solely by Scotland.

Addressing his monthly press conference in January, Jones declared that “there should be an open debate about how the UK itself might function more responsively to the needs of its constituent parts.”

Arguing that a convention would make sense in order to tie up a number of loose ends, the former Scotland office minister, Labour’s Lord Fookes, has noted:

“All the constitutional changes undertaken by several governments have been piecemeal and we have ended up with a range of anomalies. We now need to look at the constitution in a comprehensive way.”

The Scottish born Conservative MP for Epping Forest, Eleanor Laing meanwhile, not a natural constitutional reformer, has concurred, telling the Herald that “it’s wrong to fiddle about with it for short-term political gain and what we need is a longer-term, broader look at how different issues affect the constitution in different ways”.

Responding to a question last week from the former Conservative Scottish secretary, Lord Forsyth, the current Lib Dem advocate general for Scotland and former Scottish deputy first minister Lord Wallace told the House of Lords that any move towards either devo-max or a fully federal United Kingdom would require a further referendum.