SNP deputy leader Nicola Sturgeon has embarked on what can only be described as an exercise in full frontal-spin at best and rank hypocrisy at worst. 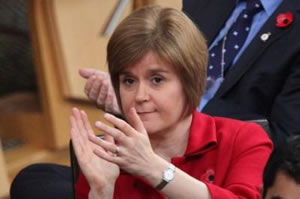 Scottish deputy first minister, Nicola Sturgeon, used the weekend to embark on what can only be described as an exercise in full frontal-spin at best and rank hypocrisy at worst.

Using an essay in the Scotland on Sunday newspaper in which she made a direct appeal to those favouring devo-max to vote yes for independence, she wrote of the “damaging uncertainty about our place in the European Union created by David Cameron’s speech last week”.

Indeed, such is the audacity and desperation by the SNP to get its plans for an independent Scotland to join the EU sorted, Sturgeon has taken the unusual step of making an appeal directly to the foreign ministers of each member state.

Just days after the President of the European Commission made clear he would not be meeting the Scottish government to sort the SNP mess out, Sturgeon sought to distance Holyrood from David Cameron, making clear her party’s commitment to the EU.

Concluding Scotland benefits “greatly from the peace and security provided by membership”, she expanded in her letter to foreign ministers:

“I therefore want to assure all member states that following a positive result in the [independence] referendum we would work with the United Kingdom and the rest of the EU in partnership to ensure we continued to play an active part in that community of interest.”

Whilst arguing the SNP felt “certain aspects of the EU” were in need of reform, such as around fishing and carbon emissions, she continued:

“However, we understand those reform ambitions can only be achieved through dialogue with member states from within the EU.

“That is why we do not support the holding of an in/out referendum on the United Kingdom’s membership. We have no intention of leaving the European Union. On the contrary, we will seek to be a constructive member of the union working with other member states to maximise the benefits we have enjoyed as members for over 40 years.”

However warm the words might sound towards the EU, one questions just how committed the SNP really are to a strong Europe when it is prepared to bypass the inconvenient truths coming out of the Commission that an independent Scotland would simply need to join the back of the queue and await its turn to go through the convoluted process of re-applying for membership.

And more questionable still, one wonders just what a letter from Holyrood will actually achieve.

“In the hypothetical case of independence, Scotland would have to join the queue and ask to be admitted, needing the unanimous approval of all member states to obtain the status of a candidate country… and to sign the final treaty [of accession].”

Just last week, as Sturgeon herself was visiting Ireland, the Irish Europe minister – whose government holds the six-monthly rotating presidency of the EU – also backed the suggestions an independent Scotland would need to reapply for membership of Europe’s top club.

Whilst explaining Scotland would be welcome in the EU as a separate nation, speaking to BBC Scotland, Lucinda Creighton explained:

“If Scotland were to become independent, Scotland would have to apply for membership and that can be a lengthy process, as we see even with the very advanced and well-integrated countries like Iceland, where I’ve just come from.

“Iceland is obviously a member of Efta (European Free Trade Association) and had been deeply involved in the single market for many years, but still has a task in terms of transforming its legislation and fitting into the European requirements for membership.

“And that would be the case, I think, for Scotland as well. It may not take as long, but there would be an application and a negotiation process, as there is for any candidate country.”

In the Czech Republic, meanwhile, foreign minister Karel Schwarzenberg has warned an independent Scotland would get a worse deal in the EU if it was on its own. Speaking during a recent interview with the BBC, he said Scotland would fare far worse from being a much smaller, less significant member state.

“In our own history, as you know, 20 years ago we separated and out of Czechoslovakia there were two independent countries.

“Being a foreign minister I can tell you it has some advantages, but the international weight of both republics together is lesser than the former Czechoslovakia.”

All this on top of the warnings from one former senior diplomat that re-entering the EU after voting for independence would prove “complex and costly” for Scotland.

“So an independent Scotland would need to go through the same accession process as have all but the original six member states, a process which the Croats have just successfully completed, but in which the Turks are bogged down. Readmission would be possible for Scots only when every existing member state had agreed to every detail of the terms.

“And even then an adverse parliamentary or referendum vote on ratification, in any EU capital, could still sink the ship. No wonder the SNP is in denial.”

In declaring David Cameron to be the biggest threat to Scotland’s influence and position within the EU, Nicola Sturgeon has attempted not so successfully to divert attention from the twin threat to Scotland’s position within Europe posed by both Holyrood and Whitehall. Little wonder the Better Together campaign has accused the deputy first minister of not being prepared to take no for an answer.

47 Responses to “Spin, hypocrisy and the SNP’s desperate last throw of the EU dice”