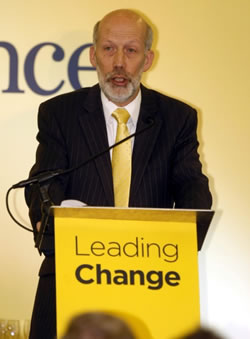 The Alliance Party of Northern Ireland has today published its proposals aimed at establishing a shared society.

In May last year, party leader and current justice minister, David Ford, withdrew his party’s participation in cross-government talks on establishing a shared society, arguing it had turned into an exercise aimed at creating an “illusion that the DUP and Sinn Fein are serious about agreeing a strategy that will actually promote a shared society”.

In publishing the strategy, entitled “For Everyone”, Ford has warned that establishing a genuine and sustainable shared society is now the biggest issue facing Northern Ireland’s politicians.

“Building a shared future in Northern Ireland is the biggest challenge facing our political institutions and wider civic society. This challenge has been clear for many years, but has now been brought into even sharper focus by recent events on our streets.

“Continued divisions in our society impact upon people in many ways, including how we live, how we learn, how we work and how we play. These divisions bring significant human, social, economic and financial costs.

“By contrast, the creation of a shared future would provide better opportunities for all and significantly assist the development of our economy.

“For the past decades, all of the main initiatives to improve community relations have occurred under Direct Rule. But if we are to fundamentally transform this society, then a deep and meaningful commitment to a shared future must be embedded within the Assembly and the Executive. Such considerations should be right at the heart of everything that government does.

“Yet six years on from the restoration of devolution, there is still no comprehensive policy in place.”

Among the proposals outlined in the document are:

• The development of a cross-departmental strategy to tackle youth alienation, sectarianism and racism, alongside detailed action plans developed in partnership with young people and youth providers;

• Taking a “long-term strategic approach” to working with young people outside school hours to promote a shared society;

• Establishing a minimum target for 20% of children being educated in integrated schools by 2020;

• All future new school builds should, except in exceptional cases, be integrated.

• The union flag should be flown over public and civic buildings in Northern Ireland on designated days as defined by the Department for Culture, Media and Sport;

• A consultation should be established on developing shared symbols for Northern Ireland whilst the Executive should establish a working group to tackle the thorny issue of parades.

Turning their attention to the difficult issue of addressing the past, the Alliance also call on the British and Irish government to “agree terms for a cross-party talks process, aimed at reaching agreement on arrangements for dealing with the past”.

It calls also for the work of the Community Relations Council to be developed into a dedicated, standing, regional Shared Future Council.

• Alliance overtakes UUP in the polls – but what does this mean? – December 3rd 2012

• How best to address the legacy of Northern Ireland’s troubled past? – July 20th, 2010