Today's labour market stats are no cause for celebration - things could be, and should be, an awful lot better. 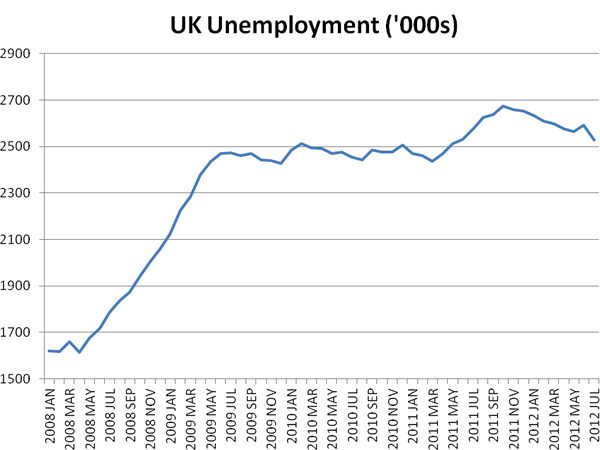 Shamik has already summarised the labour market figures in a post on Left Foot Forward earlier today. The figures are obviously to be welcomed – the fall in unemployment, the rise in employment and the fact the youth unemployment is now below one million are all good news.

But today’s figures are no cause for celebration – youth unemployment is still far too high, real wages are still falling, long term unemployment is still at mid 1990s levels and we still have 2.5 million people out of work and another 1.4 million working part-time jobs when they want a full-time one.

The DWP has been quick to point out it is “a real landmark that more people are in work than ever before”, and whilst the number of people in work is at its highest level since 1971 this claim is somewhat misleading. The population has increased considerably since 1971 and far more women are now active in the labour force.

What really matters is the employment rate (the percentage of the workforce actually in employment). Whilst today’s figures do show this rising to 71.3%, it was at 73% in early 2008, before the recession. This really is the important point – whilst today’s figures (and those of recent months) do show signs of better labour market performance they also show how far the UK still has to go and remind us things could be, and should be, an awful lot better.

Take for example unemployment – the graph below shows the number of unemployed people since 2008:

First, that unemployment rose, from pre-recession trough to peak, by more than 1 million over the course of the crisis. It has since fallen by around 150,000. In other words we have to get unemployment to fall by another 850,000 to get back to pre-recession levels.

If it continues to fall at a pace of 50,000 a quarter this will take more than four years. At the current pace we won’t get back to 2008 unemployment levels until late 2016.

Second, the graph above makes the trends in unemployment much clearer. The labour market has been through four distinct phases since 2008.

Firstly, there was a sharp rise from mid-2008 until mid-2009 as output collapsed followed by a second stage of 18 months of stagnation until early 2011. There was then another rise from spring 2011 until last autumn. Finally we have the recent falls in unemployment. Since the start of this year unemployment has been falling again but is still higher than in early 2011.

If we had avoided a double-dip and if the economy had not been essentially stagnant for two years, it is likely unemployment could be a lot lower.

The unemployment rate is now down to 7.9% and many are hailing this as a success. By contrast the US unemployment is at 7.8% and this is widely reported as a disaster.

We should welcome any fall in unemployment but we also shouldn’t forget that things are still very bad in the labour market and should be much better.