Many remember Tulu for the victory lap she took in 1992; a symbolic gesture that signalled the end of Apartheid on the track.

The day that Derartu Tulu won the women’s 10000 metres race in Barcelona 1992 – draping the Ethiopian flag across her shoulders – was the historic day when the first black African woman won a gold medal., 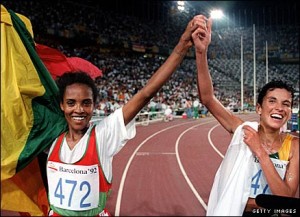 Derartu was born in 1969; the seventh of 10 children. Her potential started to become apparent in primary school, once she beat her school’s star male athlete.

Tulu was just 23 when she won the gold medal for Ethiopia at the 1992 Barcelona Olympics.

Due to starting a family and injury, Tulu was unable to return to the Olympics until 2000, but when she did she won gold again for the Women’s 10000 metres.

She is the only woman to have won two gold medals in the history of the event.

After a year recovery following the birth of her second child, Tulu took to marathon running. She finished second in the Madrid marathon in 2008, and was the first Ethiopian woman to with the New York marathon in 2009.

“I really didn’t expect to win, I was very surprised…

“I thought I would get back to that level, but I thought it would take much longer. When I ran Philadelphia, it gave me an idea of what could happen.”

“Until I stop running, I expect to run at a high level.”

The New York Times reported after the 2009 New York Marathon:

When Radcliffe, with a painful left hamstring, dropped back on the slope of Fifth Avenue, about four miles from the finish line, Tulu waited for her.

Radcliffe could barely lift her legs, though, and Tulu raced back to the diminished lead pack with plenty in reserve.

With a quarter-mile to go on Sunday in the 40th running of the New York Marathon, Tulu burst past 41-year-old Ludmila Petrova and flashed a familiar finishing kick from her track repertory. Gliding on the leaf-strewn homestretch in Central Park, Tulu broke the tape in 2 hours 28 minutes 52 seconds, and became the first woman from Ethiopia to win the race.

Many remember Tulu for the victory lap she took in 1992 with white South African Elena Meyer (pictured); a symbolic gesture that signalled the end of Apartheid on the track.