"The proportion of people saying they were satisfied with the way the NHS is run has fallen from 70 per cent in 2010 to 58 per cent last year – the biggest drop recorded since the survey began almost 30 years ago.

Satisfaction in the NHS declined significantly in the mid-1980s and mid-1990s under the Conservatives and rose dramatically under the last decade during the Labour administration.

With the Conservatives back in power, trends have reasserted themselves. As the Daily Telegraph reports:

“The proportion of people saying they were satisfied with the way the NHS is run has fallen from 70 per cent in 2010 to 58 per cent last year – the biggest drop recorded since the survey began almost 30 years ago.”

Lo0king back over the trend of the last 30 years, we can clearly see that NHS approval does appear to be linked to which party is in charge: 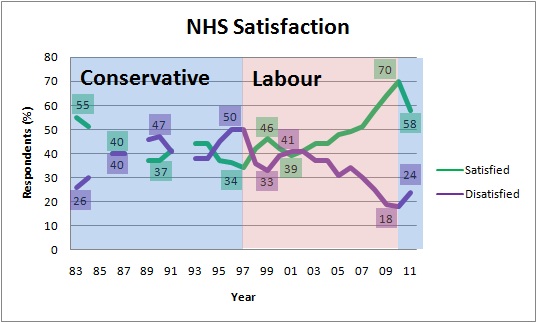 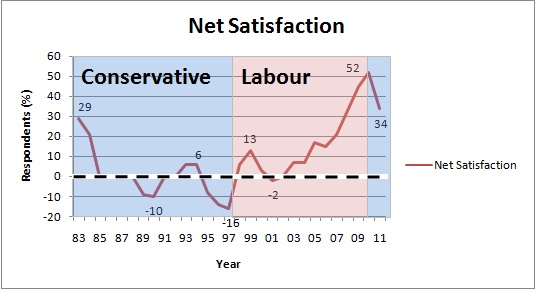 Given this record it is unsuprising that the Tories still lag behind in the polls on which party is best to handle the NHS.

The full data can be found here. The survey has been carried by the National Centre for Social Research (NatCen), as it has most years since 1983, and was commissioned this year by the Kings Fund.

• Losing the plot: How the Lords rubbished the NHS bill – then voted for it anyway 15 October 2011