It emerged today the Tory-led government has plans to attack the benefits of blind people, reports Shamik Das.

Not content with taking money off cancer patients and disabled children – and making disabled people’s lives a misery generally – it emerged today the Tory-led coalition have plans to attack the benefits of blind people as well.

The proposals have prompted outrage from disgruntled Lib Dems, who are ramping up the pressure on Nick Clegg to stand up to David Cameron and George Osborne and speak out and defend some of the most vulnerable in society from the Tory thirst for “efficiency” aka austerity. 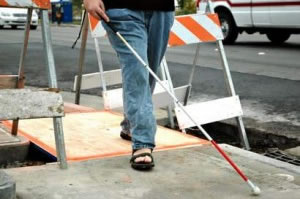 Government plans which could reduce state benefits paid to thousands of blind people have sparked a revolt by Liberal Democrat MPs in the latest sign of tension inside the coalition over cuts.

The Liberal Democrat rebels are demanding a U-turn after it emerged that many blind or partially-sighted people who currently receive disability living allowance (DLA) of up to £120 a week could lose out when it is replaced by a new personal independence payment (PIP) from next April.

Although Nick Clegg is defending the government’s plans, he is under intense pressure from his MPs to lobby for changes before the new system is implemented….

Critics of the shake-up claim that the points system under which DLA claimants will be reassessed is biased against the blind because it puts too much emphasis on tasks such as the ability to walk and not enough on the special needs of those who cannot see.

Lib Dem backbencher Mike Hancock MP is one of the most strident in his opposition, telling the Indy the plans are worse than anything that happened “in the worst days of the Thatcher government” and that he didn’t get into politics “to punish people who cannot help themselves”.

Of the real life impact on blind people of the proposed cuts, the Royal National Institute for the Blind’s Steve Winyard pointed out:

“Everyday tasks which sighted people take for granted cost people with sight-loss extra money – for example paying for assistance with cleaning and ironing. Other blind or partially sighted people may require food-labelling systems to ensure they don’t eat out-of-date food. These costs are ongoing.”

• IDS’s continuing spin war against people with disabilities: part 47 14 May 2012

The points system on which the reformed benefit works focuses on whether claimants can walk, not whether they can see, with costs incurred by blind and partially sighted people being disregarded.

The needs of blind people are very clearly not being met, yet their concerns, as with those of terminally ill cancer patients, disabled children and all manner of individuals hit by the government’s cruellest cuts, continue to be ignored.