“The results are in: Keynesians have been completely right, Austerians utterly wrong - at vast human cost” - so wrote Nobel laureate Paul Krugman today.

“The results are in: Keynesians have been completely right, Austerians utterly wrong – at vast human cost” – so wrote Nobel prize winning economist Paul Krugman in the New York Times following yesterday’s announcement Britain is in a double-dip recession.

He is, of course, absolutely right; for starters, compare our own austerity-driven failure to the fate of the US economy. As Left Foot Forward reported yesterday, the US economy is now 0.8 per cent above its pre-crisis peak, while the UK economy is 4.3 per cent below, as Graph 1 shows. 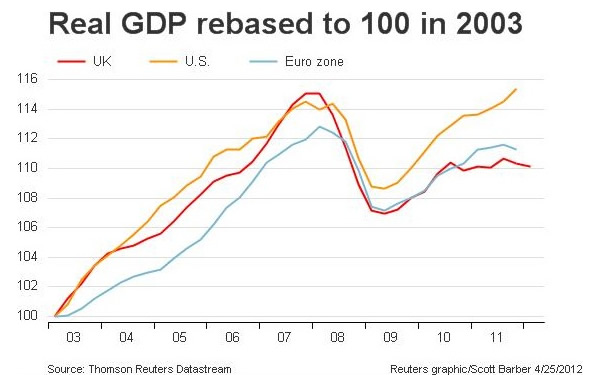 “It’s important to understand that what we’re seeing isn’t a failure of orthodox economics. Standard economics in this case – that is, economics based on what the profession has learned these past three generations, and for that matter on most textbooks – was the Keynesian position.

“I wish I could believe that this would really be enough for us to move on and consider what can be done, now that we know that the ideas behind recent policy were all wrong. But that’s wishful thinking, I suppose.

“Nobody ever admits that they were wrong, and Austerian ideas clearly have an emotional and political appeal that is resilient to any and all evidence.”

And it’s not just progressive economists saying so – some on the right are finally coming round to recognising the insanity of extreme austerity.

“If austerity kills growth and thereby revenues, the debt problem can worsen. And Britain, remember, isn’t in the eurozone; it has some currency flexibility to ride some of the shocks. Even so, the passage this ship has to pass through to growth and lower debt is getting narrower and the rocks and tides more treacherous.

“The goal of structural fiscal balance within one five-year parliament has already been abandoned in the face of reality.

“As I’ve said before, I have a long record of fiscal hawkishness. I’m a Tory and want them to succeed. But the one time I worry about fiscal retrenchment is in a period of global recession, where premature austerity can hurt, not help.

“The key is to stimulate enough to get the economy moving on its own momentum and then phase in serious long term structural budget cuts and tax reform.”