As Nick Clegg formally launches the Youth Contract today, Izzy Koksal explains how everybody, taxpayers and the unemployed alike, are getting a rough deal.

Everybody is getting a rough deal in the Youth Contract, writes Izzy Koksal

First of all, but least importantly, there’s Nick Clegg, who formally launched the Youth Contract today. 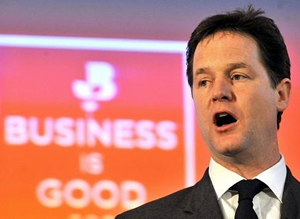 It must be more than a little bit embarrassing for him to announce he’s spending £1 billion of taxpayers’ money on a programme that will make scant difference to youth unemployment, and may actually exacerbate it.

Then, most importantly, there are the unemployed young people who will find themselves either being exploited on the Work Experience scheme, threatened with the loss of benefits if they withdraw from a job under the Work Programme, or be paid just £2.60 an hour in a apprenticeship.

And finally there are the taxpayers, who are being told by a Cabinet of millionaires to watch their pennies during this time of austerity – only to see the government handing over millions of pounds to multi-million pound companies such as A4e and McDonald’s.

• Unemployment: How Cameron and Clegg are letting the next generation down 14 Dec 2012

Let’s have a closer look at this contract to see how every aspect of it is problematic and looks doomed to fail.

Work Experience scheme – 250,000 new places over the next three years.

This is the ‘workfare’ scheme that kicked off all the public anger that saw high street stores dropping out one after the other in order to protect their brands. But some have stuck with it after employment minister Chris Grayling appeared to drop the sanctions linked with the scheme in an attempt to reassure angry citizens and worried businesses that it really is voluntary.

However, Grayling couldn’t quite bring himself to make this a truly voluntary scheme and so kept indirect sanctions – if you refuse to go on the scheme, they’ll simply put you on another. So it’s not actually voluntary at all. The Guardian have found evidence of jobseekers who declined to go on the Work Experience scheme being forced onto Mandatory Work Activity.

Under this scheme, Tesco, Holland and Barrett, McDonald’s and many other multi-million pound high street stores are getting unpaid labour from young people.

The Youth Contract also boosts funding for another workfare scheme, Mandatory Work Activity – except the Department of Work and Pensions and Nick Clegg have been very quiet about this.

This was only recently discovered by a freedom of information request. As if the Work Experience scheme wasn’t enough to keep our young people in check, they’re boosting the other one too.

As you’ll no doubt know, the scheme doesn’t help people get jobs. The DWP admit this themselves in a 2008 report (pdf). It actually exacerbates unemployment as paid workers’ jobs are replaced by unpaid workers.

Then there is the ‘wage incentives’ part of the Youth Contract. There will be 160,000 job subsidies to encourage employers to take on new staff. They must employ a young person from the Work Programme for at least 26 weeks. But there are many issues with this.

Under the Work Programme companies such as A4e – who are currently being investigated for systematic fraud – are paid money to get young unemployed people into work. This wage incentive from the government is therefore a subsidy to them as it does the job they are being paid to do – that is, find the young unemployed person a job.

This doesn’t seem a very efficient way of doing things at all – A4e seem to be getting a rather good deal at the expense of the taxpayer. This part of the Youth Contract, like the Work Experience detailed above, is also incredibly coercive. If the young person refuses a ‘job’ that is created by this wage incentive, they will lose their benefits.

Furthermore, under the Work Programme, the companies running it can do what they want with clients, so before being coerced into this ‘job’ the young person may have been put on ‘workfare’ as well.

Finally, there are 20,000 extra payments to encourage employers to take on young people as apprentices. As an apprentice the young person may receive just £2.60 an hour for the time and effort they are putting in. If this wasn’t exploitative enough, taxpayers’ money is being channelled to huge private companies.

The Youth Contract, on top of that outlined above, just won’t fulfil its stated aim of getting young people into employment.

The real problem is the lack of jobs out there. There are 15 people applying for every McDonald’s job – however much Clegg and the coalition try to impose Work Contracts and Work Experience on young people, it will not alter this reality.

To really deal with the problem of youth unemployment would be to admit the government’s austerity programme is not working and they must move away from it. Taking a good hard look at our education system wouldn’t be a bad idea either. Only by taking these steps will the issue of youth unemployment begin to be meaningfully addressed.

38 Responses to “Breaking down the Youth Contract”