On Europe, Nick Clegg is less in tune with his own voters than the Tories, a new YouGov poll reveals.

One of the few areas where Nick Clegg can claim to have shown genuine and passionate distance from David Cameron is in his attitude towards Europe. 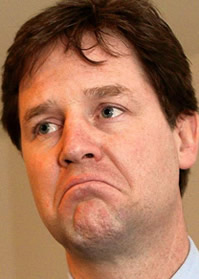 Following the prime minister’s non-veto on the eurozone crisis measures before Christmas, it was obvious from interviews that the Lib Dem leader was not happy with how his coalition partner had carried out negotiations.

However, on this ‘yellow line’ his own voters appear to be closer to the Tories than his party, according to new research from YouGov Cambridge:

Survey results for individual political parties suggest that Nick Clegg is out of step with a majority of his own party, as well as both Labour and Conservative voters, on attitudes to European integration and sharing sovereignty.

Liberal Democrat voters sit in conflict with their party leadership on the question of Europe – a significant majority of Lib Dems prefer national control of many policy areas, including:

• Trade links with other countries, say 51% of Lib Dems;

The research does not go on to say how highly Lib Dem voters rate European issues as an important political topic. That is where Eurosceptics – like railway nationalisation enthusiasts on the left – take false comfort from polls showing public majorities in their favour.

“Banging on” about a topic that most of the population agrees with you on but do not think is very important can make you look weird.

But that on one of the few areas that defines Clegg as a non-Tory he is less in tune with his own voters than the Tories, cannot be a good sign for the deputy prime minister.

7 Responses to “On Europe, Lib Dem voters are closer to the Tories than Nick Clegg”