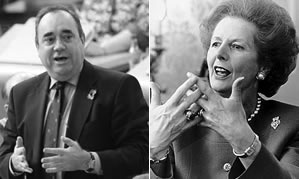 To receive the Week Outside Westminster in your inbox, sign up to the email service

As the much anticipated Iron Lady was finally aired in cinemas across the country, first minister Alex Salmond used an interview with the Scotsman to outline the part he felt he played in Thatcher’s eventually downfall.

Speaking of the time he broke conventions and intervened in 1988 on Nigel Lawson’s budget he concluded:

“Some would say it took me from obscurity to prominence, but I intervened on Nigel Lawson during the budget to protest at the poll tax. I said this is an outrageous tax on the poor, while giving tax cuts to the rich at the same time.

“The whole of the Tory benches roared at me and the Commons authorities switched off my microphone.

“I had thousands of letters about this in Banff and Buchan, a lot of which were supportive. This was people saying the poll tax is unacceptable and we’re not having it.  We later saw the downfall of Thatcherism.

“The budget speech helped to kick-start the idea that the Thatcher government was not impregnable.”

However Labour MP for Aberdeen North, Frank Doran, who was in the Commons that day, dubbed Salmond’s interpretation of the event and its significance as “fantasy”.

Meanwhile, as Salmond called on world leaders to make 2012 a year of “climate justice”, he faced criticisms at home as it emerged his government had quietly dumped efforts to stabilise the number of car journeys on Scottish roads whilst admitting just 14% of the government car fleet were fuel efficient.

“We have set really tough climate change laws in Scotland, but we need a credible plan to meet the targets. Transport and housing are predicted to be the biggest polluters in coming years so we have to make changes.

“We need a serious, credible, and urgent plan to implement our climate change laws in a way that is fair and economically sustainable.”

Plaid Cymru formally opened nominations for candidates to lead the party, with results due in March.

As the party’s chief executive, Rhuanedd Richards, spoke of 2012 being a “very important year” for the party, the BBC’s Wales political editor, Betsan Powys, said of the contest ahead:

“Having lost ground in last May’s election and with their leader stepping down, Plaid Cymru have spent the last few months reviewing what should be done differently.

“They’ll need to spell out their positions on issues like future coalitions and independence, as well as the current economic challenges facing Wales.

“There’s an alternative element to the vote with second preferences involved – it means that prediction is a fool’s game, as any Miliband brother will tell you.”

As voters prepare to elect the first police commissioners in November, meanwhile, one former Labour Home Office minister outlined his intention to stand.

Explaining his decision to contest the post of commissioner in South Wales, the Cardiff South and Penarth MP, Alun Michael, declared:

“Few aspects of the public service are more important than the police, for we invest them with significant powers but we expect them to risk their lives to protect individuals and communities.

“Governance of the police is a key issue in a democracy, and whether we think that the creation of police commissioners is a good idea or an expensive diversion at a time of massive cuts, the legislation is in place, so it’s going to happen and we must make it work.”

Announcing plans for an 18-month rotation of who fills the party’s ministerial post in the Stormont Executive, SDLP leader Alisdair McDonell made clear he was not contemplating a move into opposition.

“Removing our team from the Executive would in effect remove us from any influence we have there. If you have a house, even if it is a bad house, you don’t give it up and go and pitch a tent in the street, in the snow – that’s the point.”

However, responding to the announcement in the Belfast Telegraph, Henry McDonald wrote:

“When it comes to Titanic metaphors, the SDLP is the party that just keeps giving.

“Last year during the leadership battle to succeed Margaret Ritchie, this writer suggested that the SDLP was in danger of sinking into oblivion and that unless a new radical course was plotted at the helm of the party, it was as doomed as the ill-fated ship, whose 100-year commemoration occurs in 2012.

“Now we have that ‘radical’ idea from the recently elected leader, the South Belfast MP Alasdair McDonnell. He is going to have rotating ministers who will only stay in a portfolio for one year at a time. Radical? It sounds more like a case of rearranging the deck chairs even after the ship has struck the iceberg.”

“2012 must see the delivery of a strong Cohesion, Sharing and Integration strategy and Alliance will not support anything but a robust community relations strategy.

“The New Year is a time for making resolutions. All politicians here must make one solid resolution for 2012 – that they are committed to ending division in our society, and this must be done through the delivery of the strongest possible CSI strategy. We have heard much talk about a shared future. Now is the time for action.

“A united community is essential for stability and to boost our economy. It is absolutely clear that divisions in our society act as a deterrent to potential investors. What sort of message does it send out to global business leaders that we live in a society that is beset with segregation?”

• Sign up to receive our weekly summary of the news from Scotland, Wales and Northern Ireland, The Week Outside Westminster