Ed Jacobs argues that Cameron's intervention into the Scottish independence debate will do far more harm than good for those in favour of the union. 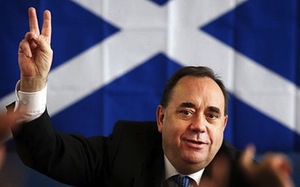 Just a matter of weeks after it was reported that the House of Lords is set to support an amendment to the Scotland Bill that would enable Westminster to set the date of an independence referendum, and David Cameron has given the strongest indication yet that he is prepared to seize control of the timetable from the SNP, who have consistently pledged to provide for a vote by the second half of the current Scottish parliament.

Speaking during a New Year interview with Andrew Marr on Sunday, Cameron, whose party in the most recent YouGov poll for the Sunday Times had the support of just 18 per cent of people in Scotland, argued:

And I think we owe the Scottish people something that is fair, legal and decisive.

So in the coming days we’ll be setting out clearly what the legal situation is, and I think we need to move forward and say, ‘Right, let’s settle this issue in a fair and decisive way’.

Cameron’s remarks come as the latest in a string of ministers at Westminster who have argued that the uncertainty surrounding it’s constitutional future is harming Scotland’s economic recovery, with the former Conservative Scottish Secretary, Lord Forsyth, having led calls for Westminster to impose a referendum at a date of its, rather than Holyrood’s, choosing.

Cameron’s sentiments however remain dangerous for those in favour of the union.

By seeking to override the expressed wishes of the Scottish government which less than a year ago won an outright majority in the Scottish parliament under a system that was meant to prevent it, Westminster risks feeding the anti-London sentiments now prevailing in Scotland, alienated as they are by a deficit reduction plan which is causing such pain.

The position is very clear – the Scottish government achieved an overwhelming mandate from the people of Scotland to hold the referendum in the second half of this parliamentary term, and that is exactly what we will do.

Meanwhile, Scottish born former Labour chief whip Ann (now Baroness) Taylor has attracted cross party support for an amendment to the Scotland Bill that would provide ex-pat Scots in England, Wales and Northern Ireland with a vote in any referendum.

According to Scotland on Sunday, the move would increase the total size of the electorate in such a vote by 750,000. Former Scottish Labour MP and MSP Lord Foulkes of Cumnock has explained:

Ann [Lady Taylor] wants to open this up for debate. She was born in Motherwell and has a strong connection to Scotland. She still supports Motherwell. She is as interested in Scotland as some people are who are still living here. She wants the Scottish diaspora in the UK to be included.

With support for Scottish independence showing signs of increasing, parties fighting to maintain the Union remain in a dangerous place. Faced against an SNP which now has the organisation and strategy in place for a campaign, pro-unionists need to carve out a message that clearly resonates with Scottish voters about why it should remain part of the UK.

Talk of timetables and process have served only to give the impression that Westminster is interested less in the future of Scotland and more about political posturing vis-à-vis the SNP. It’s time to get real and wake up to the threat Alex Salmond and Co really pose.

As Kevin McKenna has written in the Observer:

Are the parties of the Union in Scotland in the midst of completing a confidence trick on their London masters? Ever since the SNP annexed Scotland at last year’s Holyrood election, the Labour party and the Tories have pledged to fight against Scotland being separated from the United Kingdom with every fibre of their being.

I’ll give them the benefit of the doubt here, for perhaps they are simply being coquettish and refusing to reveal too early the armoury with which they will fight to save the UK.

Last week, Alex Salmond chose to voice what everyone else in Scotland knows instinctively: that David Cameron is the best weapon the pro-independence movement possesses.

He could have gone further.

For in any photograph where Cameron is joined by George Osborne and their Downing Street fag, Nick Clegg, the SNP tally men can notch up another, say, 5,000 votes in favour of separation.

Indeed, faced with such a photograph of smug, ill-earned indolence and privilege, most of us would gladly take refuge in a political and cultural union with Uzbekistan.

With the addition of Scots such as Danny Alexander, the chief secretary to the Treasury and Michael Moore, the Scottish secretary you have, to paraphrase Churchill’s description of Clement Attlee, two sheep in sheep’s clothing.

If anyone were to sit through back-to-back speeches by this grotesquely over-promoted pair then many of us, quite literally, could find ourselves sleepwalking towards independence.

Around two-thirds of Lib-Dem voters have abandoned the party since Clegg sold its soul for a few private chauffeurs. Everything they touch instantly turns to ash, so having them at the forefront of a “Save the UK” campaign will not instil confidence.